The Burgess Boys by Elizabeth Strout 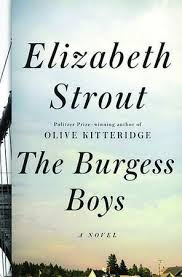 Haunted by the freak accident that killed their father when they were children, Jim and Bob Burgess escaped from their Maine hometown of Shirley Falls for New York City as soon as they possibly could. Jim, a sleek, successful corporate lawyer, has belittled his bighearted brother their whole lives, and Bob, a Legal Aid attorney who idolizes Jim, has always taken it in stride. But their long-standing dynamic is upended when their sister, Susan—the Burgess sibling who stayed behind—urgently calls them home. Her lonely teenage son, Zach, has gotten himself into a world of trouble, and Susan desperately needs their help. And so the Burgess brothers return to the landscape of their childhood, where the long-buried tensions that have shaped and shadowed their relationship begin to surface in unexpected ways that will change them forever.

Family roles, assigned early and sometimes arbitrarily, often continue to define us well into adulthood. I grew up as "the musician" and "bookworm" in a family of athletes (not entirely unwarranted labels) and am still never the first choice in a family pick-up game of basketball or softball. For the record though, I love sports and relish the role of fan/spectator.

In the Burgess family, the roles were dictated by tragedy. A freak accident involving three young children in a parked car caused the death of their father. The lives of all three children, now well into middle age, have been defined by the official family account of the accident. As a new family crisis calls the brother back to Maine, difficult truths emerge, forcing a reevaluation of old assumptions and challenging the Burgess boys  to move forward.

I've been reading Elizabeth Strout since Amy and Isabelle  was published in the late 1990's and have been in awe of her writing and characters ever since. Strout's perception into the human psyche is amazingly keen. She understands what makes people who they are and how it colors their relationships with others. In The Burgess Boys, the sibling relationship takes center stage.

Jim and Bob Burgess, unlikable as they may be, are presented with the utmost compassion and honesty.  Other characters, like Bob's twin Susan and her son Zach, Jim's wife, Bob's ex, and Somali immigrant Abdikarim Ahmed, receive similar treatment. By the end of the novel, it was hard to say good-bye to these people. In fact, I'd still like to check in and see how they're doing. Elizabeth Strout has taught me that a truly great writer can make you care about characters, even when you don't particularly like them.

"While the Burgesses seemed to have no knowledge of, or interest in, food (there were meals of scrambled hamburger covered with an unmelted sheet of orange cheese, or a tuna casserole made with canned soup, or a chicken roasted without any spices, not even salt), Pam discovered that they loved baked goods, and so she made banana bread and sugar cookies, and sometimes Susan stood in the small kitchen and helped her, and whatever was baked was eaten hungrily, and this touched Pam as well - as though these kids had been starved all their lives for sweetness." p.107

"He carried also a disquieting idea, which was that he was a stranger now to the place that had been for so long his home. He was not a visitor; neither did he feel himself to be a New Yorker. New York, he thought, had been for him, like an amiable and complex hotel that housed him with benign indifference, and his gratitude was immeasurable. New York had also shown him things; one of the biggest was how much people talked. People talked about anything. The Burgesses did not." p.233

"He understood they would probably never again discuss the death of their father. The facts didn't matter. Their stories mattered, and each of their stories belonged to each of them alone." p. 318

Bottom line:
While not quite Olive Kitteridge (a Pulitzer Prize winner and personal all-time favorite), The Burgess Boys  still deserves a solid four star rating and my recommendation.

FTC disclosure:  James, who knows I'm a big Elizabeth Strout fan, sent me his ARC - thank you! A couple of weeks later, I received a hardcover copy from Random House. Watch for a giveaway post coming tomorrow.