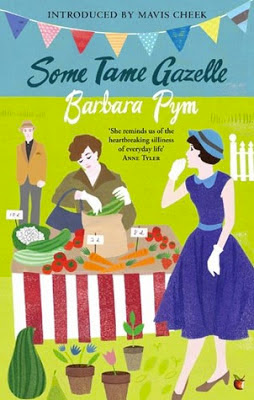 The new curate seemed quite a nice young man, but what a pity it was that his combinations showed, tucked carelessly into his socks, when he sat down. Belinda had noticed it when they had met him for the first time at the vicarage last week and had felt quite embarrassed. Perhaps Harriet could say something to him about it. Her blunt jolly manner could carry off these little awkwardnesses much better than Belinda's timidity. Of course he might think it none of their business, as indeed it was not, but Belinda rather doubted whether he thought at all, if one were to judge by the quality of his first sermon.

Some Tame Gazelle
by Barbara Pym

Some Tame Gazelle, published in 1950, is Barbara Pym's first novel and I think the opening paragraph is very representative of her style. It says pure comfort reading to me. Would you continue?

Have you read Barbara Pym?