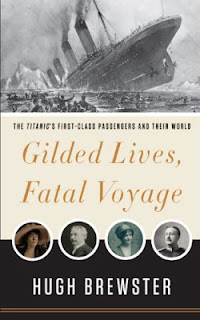 The Titanic  was going to be late.

To the first-class travelers aboard the Train Transatlantique, now chugging to a stop at Cherbourg's quayside terminus, this would be dismaying news. The six-hour journey from Paris had been quite long enough. How many hours, they wondered, would now have to be spent in this small, smoke-grimed station before White Star's new steamer could arrive to take them to New York?

Even though fiction is my normal reading fare, I also enjoy well-written nonfiction on a variety of subjects. The story of the Titanic is endlessly fascinating, so when a new book focusing on the lives of the first class passengers became available for review, I couldn't resist. Three words from the title/description clinched my decision: Edwardian, Titanic, first-class.


The Titanic has often been called "an exquisite microcosm of the Edwardian era,” but until now, her story has not been presented as such. In Gilded Lives, Fatal Voyage, historian Hugh Brewster seamlessly interweaves personal narratives of the lost liner’s most fascinating people with a haunting account of the fateful maiden crossing. Employing scrupulous research and featuring 100 rarely seen photographs, he accurately depicts the ship’s brief life and tragic denouement and presents compelling, memorable portraits of her most notable passengers: millionaires John Jacob Astor and Benjamin Guggenheim; President Taft's closest aide, Major Archibald Butt; writer Helen Churchill Candee; the artist Frank Millet; movie actress Dorothy Gibson; the celebrated couturiere Lady Duff Gordon; aristocrat Noelle, the Countess of Rothes; and a host of other travelers. Through them, we gain insight into the arts, politics, culture, and sexual mores of a world both distant and near to our own. And with them, we gather on the Titanic’s sloping deck on that cold, starlit night and observe their all-too-human reactions as the disaster unfolds. More than ever, we ask ourselves, “What would we have done?”

After a couple of chapters, I'm enjoying this quite a bit. Are you interested in the Titanic?  What do you think of the opening?

Every Tuesday, Diane at Bibliophile by the Sea posts the opening paragraph (sometime two) of a book she decided to read based on the opening. Feel free to grab the banner and play along.
Posted by JoAnn at 7:44 AM