1. The last band I saw live was our high school band at the fall concert.

2. What I look forward to most on Thanksgiving is having the whole family together.

3. My Christmas shopping is stressing me out.

4. Thoughts of the Thanksgiving dinner menu fill my head.

5. I wish I could wear high heels and still walk normally.

7. As for the weekend, tonight I'm looking forward to watching the SU basketball game, tomorrow my plans include taking twin #1 to her cello lesson (weather permitting), putting up the outside Christmas lights, and planning Thanksgiving dinner and Sunday, I want to go to church and then just read all day!

Last week I finished two books....a rare occurrence! I usually prefer to read one book at at time, but lately have had several in progress simultaneously. There is almost always an audio book for the car, too.
China Road, by Rob Gifford, is an account of his 6 week, 3000 mile journey along China's Mother Road, Route 312. Gifford, NPR's China correspondent from 1999 to 2005, traveled from Shanghai across the Gobi desert to Kazakhstan for a final farewell tour of the country. He experienced a true cross-section of present day China - from prosperity and growth in the cities, to peasant farmers hoping to feed their families for another day. Gifford, who is fluent in Mandarin, spoke with anyone he could along the way...businessmen, farmers, students, monks, a prostitute, a radio host, even an Amway salesman!
The world sees China as an emerging superpower, but Gifford contends that up close it is 'more fragile and brittle than it appears'. The book actually raises more questions than it answers. My knowledge of modern China was limited before reading this book, now I am still slightly confused. Perhaps that is the author's intention, as he also voices doubts about China's future.
One of my daughters will be traveling to China with a school group in February. She will tour Beijing and the Olympic venues, the Great Wall, Summer Palace, and even spend a day at a high school with a Chinese pen-pal. I'm sure she will bring home an interesting perspective...she is extremely insightful for a teenager.
The second book is The Guernsey Literary and Potato Peel Pie Society by Mary Ann Shaffer and Annie Barrows. This is an absolutely delightful epistolary novel about the German occupation of the Channel Islands during WWII. It has been so thoroughly and widely reviewed that I hesitate to add more. I will note that I foresee Guernsey becoming a hot literary travel destination in the near future. Remember what Midnight in the Garden of Good and Evil did for Savannah?
The book got me thinking about epistolary novels in general. This is a form I've enjoyed over the years. Helene Hanff's 84, Charring Cross Road became an instant favorite when I first read it several years ago. Clara Callan by Richard B. Wright, set in the 1930's, is a series of two women's letters and journal entries. Using two narrators, this was extremely effective as an audiobook...and remains one of my all-time favorite audiobooks. Although not really an epistolary novel, Harriet the Spy by Louise Fitzhugh also came to mind. Harriet wrote everything in those spy journals. She was a childhood favorite and, at one point, I was rereading it monthly! Finally, there is the 'big one' - Clarissa by Samuel Richardson. It's 1500 pages of letters, first published in 1747, that are dated over the course of one year. I've thought of doing a 'real time' read as a year long project. Reading the letters the date they are supposed to have been written may not work for me though. I'd either get too involved and read ahead, or get caught up in other books and fall behind. I'm just not disciplined enough to stick to a reading schedule!
Which epistolary novels have you enjoyed?
Posted by JoAnn at 9:06 AM 4 comments:

As the days get colder and shorter, homemade soup can almost always be found in my refrigerator. It's a cold, damp day....perfect for a bowl of soup.
New England Sweet Potato Soup
2 1/2 to 3 lbs. sweet potatoes, peeled and cut in 1-inch pieces
1 medium onion, chopped
1/4 cup maple syrup
1 clove garlic, minced
1/2 tsp dried sage, crushed
1/4 tsp salt
1/8 tsp black pepper
32 oz. carton chicken broth
1 cup water
1/2 cup half and half
5 slices bacon, crisp-cooked and crumbled
Directions:
1. In a 3 1/2 - 4 qt. crock pot combine sweet potatoes, onion, maple syrup, garlic, sage, salt and pepper. Pour broth and water over the top.
2. cover and cook on low heat setting for 6 to 8 hours ( or 3 to 4 hours on high)
3. Using a potato masher or handheld blender, mash the soup to desired consistency. Whish in half and half. Top individual servings with crumbled bacon.

**recipe adapted from Better Homes and Gardens
Posted by JoAnn at 5:13 PM No comments: 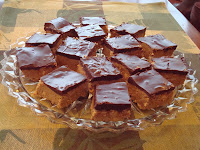 Maggie (twin A) has been in the kitchen this afternoon cooking up a batch of her favorite peanut butter bars. She got the recipe last year in her Food and Nutrition class. They are delicious, but very rich. A big glass of milk is the perfect accompaniment!

Ingredients:
18 oz. jar crunchy peanut butter
2 sticks of butter, melted
2 packages graham crackers (about 18 large rectangles)
3 1/4 cups confectioners sugar
1 bag (12 oz.) semi-sweet chocolate chips
1 stick butter
Directions:
Mix peanut butter and 2 sticks melted butter in mixer. Crush graham crackers with a rolling pin and add to mixer. Gradually add in the confectioners sugar. Press the mixture into the bottom of a 9 x 13 pan.
Melt the semi- sweet chocolate chips and one stick of butter in a saucepan on the stove. Spread
evenly over top of bars.
Chill for 1 hour and enjoy!
Posted by JoAnn at 3:40 PM No comments:

The polls are finally open. There was no line at all when I voted around ten this morning, and there didn't seem to be much of one just after four either. We don't have early voting in New York , so where is everybody? Did they all vote absentee? This is a predominantly Republican area of central New York, so did they stay home thinking their votes wouldn't matter? Lines will surely develop as we head into the evening hours, right?
Last year there was a referendum on turf and lights for the high school football field. The issue was particularly divisive, and voter turnout was unprecedented. Lines stretched out the door and curled through the parking lot. Polls were kept open late to allow voters in line at closing to cast their ballot. The referendum failed, but with turnout close to 90% nearly every voice was heard. I was expecting the same today. The results of this election may not be a surprise, but I will be very interested in local voter turnout.
Posted by JoAnn at 3:58 PM 2 comments: