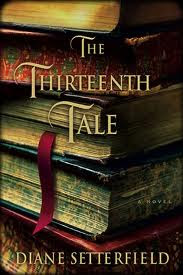 "It was November. Although it was not yet late, the sky was dark when I turned into Laundress Passage. Father had finished for the day, switched off the shop lights and closed the shutters; but so I would not come home to darkness he had left on the light over the stairs to the flat. Through the glass in the door it cast a foolscap rectangle of paleness onto the wet pavement, and it was while I was standing in that rectangle, about to turn my key in the door, that I first saw the letter. Another white rectangle, it was on the fifth step from the bottom, where I couldn't miss it.

I closed the door and put the shop key in its usual place behind Bailey's Advanced Principles of Geometry. Poor Bailey. No one has wanted his fat gray book for thirty years. Sometimes I wonder what he makes of his role as guardian for the bookshop keys. I don't suppose it's the destiny he had in mind for the masterwork that he spent two decades writing."

The Thirteenth Tale
by Diane Setterfield

It seems like most people have read The Thirteenth Tale.  It is my book club's May selection, so I'm finally getting around to it now. Approaching halfway mark, I'm involved in the story and curious about the outcome, but not loving it... yet.

Have you read this one? What do you think of the opening?

Every Tuesday, Diane at Bibliophile by the Sea posts the opening paragraph (sometime two) of a book she decided to read based on the opening. Feel free to grab the banner and play along.
Posted by JoAnn at 7:37 AM