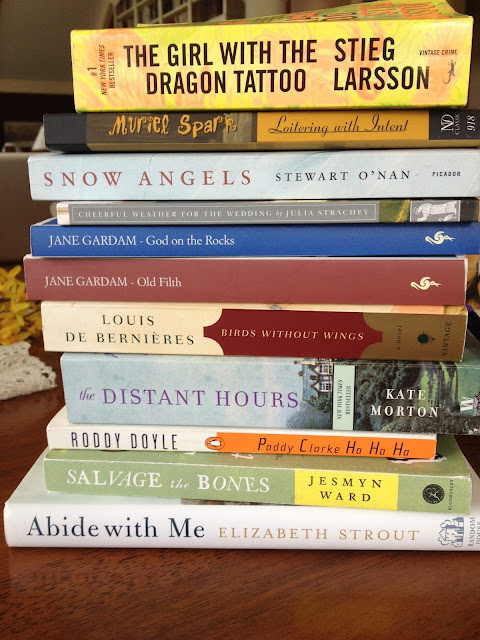 Book sale season has arrived! On Saturday afternoon, I made an impromptu trip to the Friends of the Tompkins County Public Library book sale. This is easily the largest sale around. Boasting a warehouse  filled with over 250,000 titles, I could happily browse for hours. We had all sorts of activities planned for Mother's Day weekend and a trip to Ithaca wasn't on our agenda, but around mid-afternoon it was beginning to look like a possibility and we were on our way shortly after three.

The crowd had thinned and browsing was easy by the time we arrived around 4:30. I was hoping to find something by Angela Thirkell or Barbara Pym (for Pym Reading Week), but it was not to be. There was nothing at all by Thirkell, and a single well-worn trade paperback of Excellent Women was the only Pym available.

My first thought was that Thomas had scooped up the Thirkells earlier in the day, but he struck out, too. Either nobody in upstate New York is reading Angela Thirkell, or they all sold the first weekend of the sale. As for the Pyms, Thomas left a couple of hard covers and several trade paperbacks, so there are obviously more fans in the area... and they all arrived ahead of me!

There were still thousands of books to peruse and I left with a very nice stack (from the bottom):

Abide with Me by Elizabeth Strout
Strout is always a favorite. I recently finished The Burgess Boys (fingers crossed for a review this week), loved OliveKitteridge, and enjoyed Amy and Isabelle  years ago, too. This is a pristine hardcover edition of her second novel.

Paddy Clarke Ha Ha Ha by Roddy Doyle
Prize winners always catch my attention, too, and this won the Booker Prize in 1993.

The Distant Hours by Kate Morton
I enjoyed The Forgotten Garden  and thought this might be a good summer read.

Birds Without Wings by Louis de Bernieres
Corelli's Mandolin  is a favorite. I've wanted to read this for years.

Old Filth by Jane Gardam
I've been meaning to read Gardam for some time and snapped this up in light of a recent New York Times book review.

Cheerful Weather for the Wedding by Julia Strachey
I can never pass up a Persephone Classic.

Snow Angels by Stewart O'Nan
After reading four of O'Nan's novels, I want to read them all.

Loitering with Intent by Muriel Spark
I seem to be reading a lot of British novelists lately...

The Girl With the Dragon Tattoo by Stieg Larsson
It seems everyone in the world has read these books, but I'm afraid they may be too gruesome and have continued to avoid them. Yet another friend raved about the series during a recent dinner party and convinced me to give it a try. We'll see...

Any thoughts on these books?

Email ThisBlogThis!Share to TwitterShare to FacebookShare to Pinterest
Labels: acquisitions