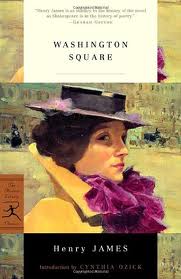 Book description (from amazon):
Washington Square follows the coming-of-age of its plain-faced, kindhearted heroine, Catherine Sloper. Much to her father’s vexation, a handsome opportunist named Morris Townsend woos the long-suffering heiress, intent on claiming her fortune. When Catherine stubbornly refuses to call off her engagement, Dr. Sloper forces Catherine to choose between her inheritance and the only man she will ever truly love. Cynthia Ozick, in her Introduction to what she calls Henry James’s “most American fiction,” writes that “every line, every paragraph, every chapter [of Washington Square] is a fleet-footed light brigade, an engine of irony.” Precise and understated, this charming novel endures as a matchless study of New York in the mid-nineteenth century.

My thoughts:
After seeing The Heiress  on Broadway (starring Dan Stevens of Downton Abbey fame!), I felt compelled to read the novel behind the play. I'm not sure how long the book has been on my shelf, but the measure is in years rather than months.

My love of the show certainly influenced my reaction to the book, and it often felt like I was watching the play again as I read. As far as Henry James novels go, this seems to be among the most readable. He is famous for long, convoluted sentences, especially in later works, but there was very little of that here. Washington Square is relatively straight-forward and easy to follow.

A description of Catherine:


"She was a healthy, well-grown child, without a trace of her mother's beauty. She was not ugly; she had simply a plain, dull, gentle countenance. The most that had ever been said for her was that she had a "nice" face; and, though she was an heiress, no one had ever thought of regarding her as a belle. Her father's opinion of her moral purity was abundantly justified; she was excellently, imperturbably good; affectionate, docile, obedient, and much addicted to speaking the truth. In her younger years she was a good deal of a romp, and though it is an awkward confession to make about one's heroine, I must add that she was something of a glutton. She never, that I know of, stole raisins out of the pantry, but she devoted her pocket money to the purchase of creme cakes..."  p. 12

and on her character awakening:


"Catherine meanwhile had made a discovery of a very different sort; it had become vivid to her that there was a great excitement in trying to be a good daughter. She had an entirely new feeling, which may be described as a state of expectant suspense about her own actions. She watched herself as she would have watched another person, and wondered what she would do. It was as if this other person who was both herself and not herself, had suddenly sprung into being, inspiring her with a natural curiosity as to the performance of untested functions." p. 104

Bottom line:
Overall, a very readable and enjoyable Henry James novel, but The Portrait of a Lady is still my favorite. The play, however, is highly recommended!

Washington Square is available as a free kindle download. 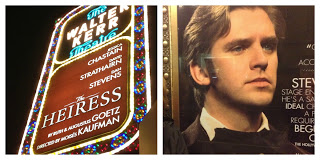