Tuesday Intro: A Glass of Blessings by Barbara Pym 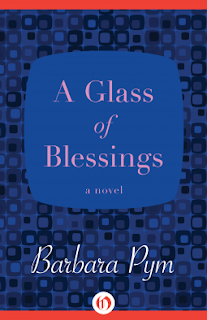 "I suppose it must have been the shock of hearing the telephone ring, apparently in the church, that made me turn my head and see Piers Longridge in one of the side aisles behind me. It sounded shrill and particularly urgent against the music of the organ, and it was probably because I had never before heard a telephone ringing in church that my thoughts were immediately distracted, so that I found myself wondering where it could be and whether anyone would answer it. I imagined the little bent woman in the peacock blue hat who acted as verger going into the vestry and picking up the receiver gingerly, if only to put an end to the loud unsuitable ringing. She might say that Father Thames was engaged at the moment and not available; but surely the caller ought to have known that, for it was St. Luke's day, the patronal festival of the church, and this lunchtime Mass was one of the services held for people who worked in the offices near by or perhaps for the idle ones like myself who had been too lazy to get up for an earlier service."

A Glass of Blessings
by Barbara Pym

With a style immediately recognizable as Barbara Pym, I quickly settled into her 1958 novel, A Glass of Blessings. Open Road Media recently released several of Pym's novels in ebook format to celebrate her upcoming centenary. I received a review copy through NetGalley.

Have you read Barbara Pym? What do you think of this intro?