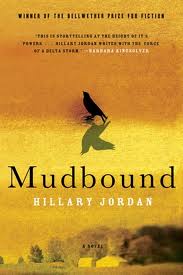 "Henry and I dug the hole seven feet deep. Any shallower and the corpse was liable to come rising up during the next big flood: Howdy boys! Remember me?  The thought of it kept us digging even after the blisters on our palms had burst, re-formed and burst again. Every shovelful was an agony - the old man, getting his last licks. Still, I was glad of the pain. It shoved away thought and memory."

Mudbound  by Hillary Jordan is my book club's February selection. I had a chance to read the first chapter over the weekend and, from the opening paragraph, the writing has totally captivated me. I can't wait to read more!

Have you read this book? What do you think of the opening?