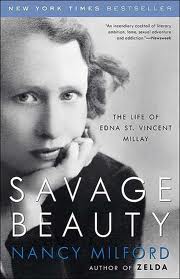 "Camden, with its ring of mountains rising behind the white clapboard houses facing Penobscot Bay, made the most of its view. Nowhere else on the coast of Maine was there such dramatic natural beauty. The houses were like weathered faces turned to watch the sea. The upland meadows of ox-eyed daisies, timothy, and sweet fern, the dark green woods of balsam and fir swept to the gentle summit of Mount Megunticook, and the rock face of Mount Battie rose from the edge of the sea as if to hold it. But it was a far less generous time than the early days of shipbuilding, upon which the town's wealth had been founded. Now even the great woodsheds along the wharves were mostly abandoned, permanent reminders of the long death of shipbuilding. The wool mills looming behind the town offered scant wages and long hours. Later in her life Edna St. Vincent Millay would say she was "a girl  who had lived all her life at the very tide-line of the sea," but in the fall of 1904, she moved with her family into 100 Washington Street on the far edge of town, in a section called Millville because it was near the mills. It was the smallest house in the poorest part of town, but it was one their mother could afford when she brought her girls to Camden after her divorce."

I've long appreciated Edna St. Vincent Millay's poetry, but only became curious about her life after discovering this marker on Mount Battie during a family trip to Camden, Maine in 2010. 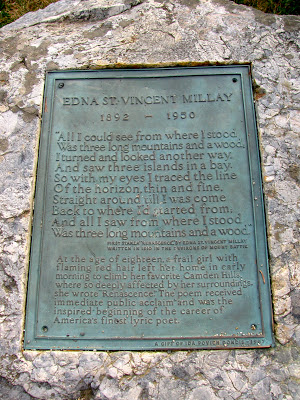 Now, almost three years later, I've finally started her biography. My plan is to read it slowly over the next couple of months.

Our view of Camden from Mount Battie: 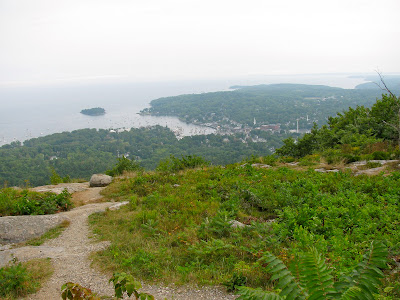 Have you read Millay's poetry? What do you think of the intro?

Email ThisBlogThis!Share to TwitterShare to FacebookShare to Pinterest
Labels: biography, poetry, Quote of the Week