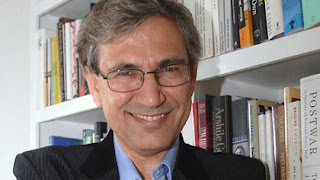 
The Turkish novelist Orhan Pamuk (books by this author) celebrates his 60th birthday today. He was born in Istanbul in 1952 and grew up in a fairly wealthy and Westernized district. He studied architecture and then journalism, but at 23 years old, he decided to become a novelist. He lived with his mother and wrote full time, and seven years later, he published his first novel, Cevdet Bey and His Sons (1982). He's worked as a novelist for 30 years and has never held any other kind of job, and apart from three years he spent in New York, he's lived his entire life in the Istanbul district of his birth.

In 2005, Pamuk gave an interview in which he made remarks about the Armenian Genocide and the mass killing of tens of thousands of Kurds. He said: "Thirty thousand Kurds have been killed here, and a million Armenians. And almost nobody dares to mention that. So I do." Criminal charges were filed against Pamuk in Turkey, and his statements resulted in a new law making it illegal to make anti-Turkish remarks. There was an international outcry, and several noted authors — including Gabriel García Márquez, Umberto Eco, John Updike, and Günter Grass — spoke out in Pamuk's defense. The charges were dropped early in 2006.

Recent books include The Naïve and Sentimental Novelist (2010) and Pieces from the View: Life, Streets, Literature (2010).

Orhan Pamuk is an author I've been meaning to read for years, yet have a vague sense of intimidation when faced with his work. The Museum of Innocence is on my shelf, but I'm not sure that's the best place to begin. Have you read Pamuk? Do you have any recommendations?


Louise Erdrich is also celebrating a birthday today. Here is my Author Birthday post from last year.
Posted by JoAnn at 9:30 AM