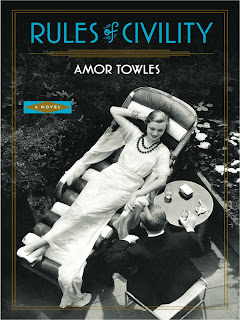 With no better plans or prospects, my roommate Eve had dragged me back to the Hotspot, a wishfully named nightclub in Greenwich Village that was four feet underground.

From a look around the club, you couldn't tell that it was New Year's Eve. There were no hats or streamers; no paper trumpets. At the back of the club, looming over a small empty dance floor, a jazz quartet was playing love-me-and-left-me standards without a vocalist. The saxophonist, a mournful giant with skin as black as motor oil, had apparently lost his way in the labyrinth of one of his long, lonely solos. While the bass player, a coffee-and-cream mulatto with a small deferential mustache, was being careful not to hurry him. Boom, boom, boom, he went, at half the pace of a heartbeat.
-Chapter 1


Rules of Civility
by Amor Towels

I started our next book club selection last Friday evening and, after reading just 25 pages, made the declaration that I will read anything Amor Towles ever writes. Besides the writing, I'm also enjoying the setting - Manhattan in the late 1930's. What do you think of the intro?