Below Stairs by Margaret Powell 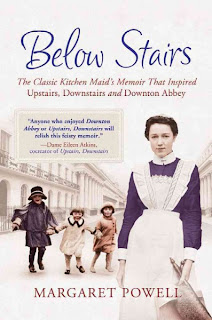 It's all about timing... and marketing. The long wait for season three is beginning to feel interminable and Downton Abbey fans are restless. Could there be a better time to reissue Margaret Powell's 1968 memoir Below Stairs? A description like "The Classics Kitchen Maid's Memoir that inspired Upstairs, Downstairs and Downton Abbey" on the cover instantly targets the audience.

I loved Margaret Powell's plain-spoken, yet feisty voice. She was an intelligent young woman forced to leave school at an early age and enter the work force, eventually ending up 'in service' as a kitchen maid - the worst job in the house. Years of hard work and determination, however, lead her to the best job - cook. It's impossible for Downton Abbey fans not to compare Powell to Daisy and, later on, to Mrs. Patmore.

Below Stairs serves up a fascinating look at real Downton Abbey-esque situations from heirarchy and protocol amongst servants, to kitchen routines and meal preparation, and even relationships with the 'upstairs people'.

"Later on in life I never ever took a place where there were nannies and children, and where they had to have separate meals in the nursery. The nanny would come down with all the airs and graces of a miniature employer, saying what the children wanted and what she wanted. There were always feuds between the nursery and the kitchen. There always were and there always had been. The parlourmaid, the housemaid, and the cook always thought nanny and nursemaid considered themselves better than they  were, and they did, of course." p 79

" Living in such close contact with other servants, a lot of quarrels went on. You can't coop up a lot of females, perhaps it even applies to men, without words passing, and what words, too. But it didn't matter how much we servants quarreled among ourselves, a united front was always presented to them upstairs... We always called them 'Them'. 'Them' was the enemy, 'Them' always overworked us, and 'Them' underpaid us, and to 'Them' servants were a race apart, a necessary evil. "p. 91

"You see I was determined to get married. I didn't want to be an old maid. In those days people put on a very contemptuous expression when they talked about 'being on the shelf', or being a spinster. It meant you were lacking practically everything. Nowadays women who don't get married have often had all the sex they want and all the security. They just don't want to take a man for life, which I don't blame them for in the least. But I needed one to support me. I couldn't see myself being a cook for the rest of my life. I wanted one to take me on for life." p. 135-6

"The employers always claimed that the training they gave you stood you in good stead when you left and married and had a family of your own. When I left domestic service I took with  me the knowledge of how to cook an elaborate seven-course dinner and an enormous inferiority complex. I can't say that I found those an asset to my married life." p.190-1

Bottom line: Below Stairs is a must read for Downton Abbey fans.

FTC disclosure: borrowed from the library
Posted by JoAnn at 8:22 AM