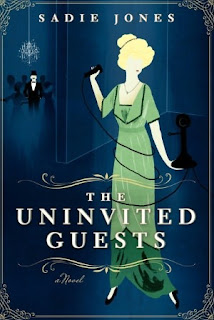 Since her marriage to Edward Swift, three years after the sudden death of her first husband Horace Torrington, Charlotte had changed her position at the breakfast table in order to accommodate her new husband's needs: specifically, aiding him in the spreading of toast and cutting of meat, owing to his having suffered the loss of his left arm at the age of twenty-three in an unfortunate encounter with the narrow wheels of a speeding gig, out of which he had fallen on the driveway of his them home in County Wicklow. Having always faced the window and wide view, now Charlotte sat on Edward's left, and faced him.

Her eldest children, Emerald and Clovis, aged nineteen and twenty respectively, but for whom the word 'children' is not inaccurate at the point at which we discover them, did not like this new arrangement. Nor did they like or approve of Edward Swift; single arm notwithstanding, they found he did not fit.

The Uninvited Guests
by Sadie Jones

I was initially drawn to this book by the cover (isn't it gorgeous?), but after just one chapter, the writing and story have me totally invested. Can't wait to read more today...