June is Audiobook Month.  Regular readers of Lakeside Musing know my love of audiobooks has been well-chronicled over the years. To celebrate Audiobook Month, I will post a review from my audio archives each Monday. This week I continue with The Immortal Life of Henrietta Lacks by Rebecca Skloot, originally reviewed 9/30/10. Keep up with all Audiobook Month activities on twitter by following #JIAM2012. 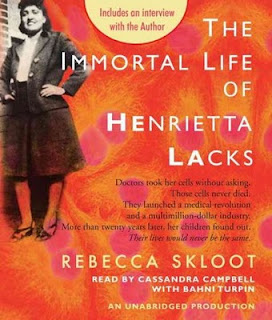 Bottom line:
Even if you have little interest in cell culture, medical research, or ethics, there is still enough human drama to keep nearly anyone enthralled.
Very highly recommended.
Posted by JoAnn at 7:42 AM