June is Audiobook Month.  Regular readers of Lakeside Musing know my love of audiobooks has been well-chronicled over the years. In celebration of Audiobook Month, I will post a review from my audio archives each Monday. This week I begin with The Big Rock Candy Mountain by Wallace Stegner, originally reviewed 6/10/11. Keep up with all Audiobook Month activities on twitter by following #JIAM2012. 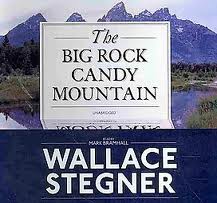 
"You had to stay in a place to make it a home.  A home had to be lived in every day, every month, every year for a long time, till it was worn like an old shoe and fitted the comfortable curvatures of your life."  (page 236)

I won't go into the plot (this is one to experience for yourself) but The New Yorker called it "A well-written study of a footloose family.. Stands out beautifully and unforgettably."

Notes on the audio production:
It took a few moments to remember why Mark Bramhall's voice sounded so familiar. Finally, I recognized him as the narrator of Revolutionary Road by Richard Yates. Again, it took some time to get used to his voice, but Bramhall is an excellent reader. My only complaint (the same one I had with Revolutionary Road) is that I found his 'female voice' annoyingly sappy. It seemed to impart a 'spineless doormat' feeling to the character, but, in all fairness, there were times when this characterization was right on the mark.

Bottom line: If you are ready to make the time commitment, Stegner's most autobiographical novel will not disappoint. It is beautiful, haunting and insightful.
Posted by JoAnn at 9:04 AM