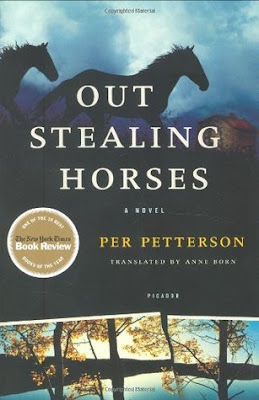 Early November. It's nine o'clock.The titmice are banging against the window. Sometimes they fly dizzily off after the impact, other times they fall and lie struggling in the new snow until they can take off again. I don't know what they want that I have. I look out the window at the forest. There is a reddish light over the trees by the lake. It is starting to blow. I can see the shape of the wind on the water.

Out Stealing Horses
by Per Petterson

Our next book club selection is a book that has been on my wish list for years. I read the first few pages of Out Stealing Horses  last night - my initial thought is that this book will be very visual and very quiet. And maybe a slow build, too. Exactly what I'm in the mood for at the moment.

Here is a portion the goodreads summary:


Trond's friend Jon often appeared at his doorstep with an adventure in mind for the two of them. But this morning was different. What began as a joy ride on "borrowed" horses ends with Jon falling into a strange trance of grief. Trond soon learns what befell Jon earlier that day--an incident that marks the beginning of a series of vital losses for both boys.

Set in the easternmost region of Norway, Out Stealing Horses begins with an ending. Sixty-seven-year-old Trond has settled into a rustic cabin in an isolated area to live the rest of his life with a quiet deliberation. A meeting with his only neighbor, however, forces him to reflect on that fateful summer.

What do you think? Are you tempted to keep reading?