Did You Ever Have A Family by Bill Clegg 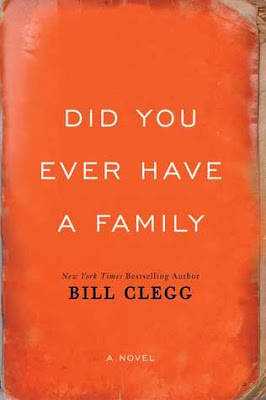 Did You Ever Have a Family
by Bill Clegg
Gallery/Scout Press, 2015
304 pages
source: borrowed from the library

Summary (from goodreads):
On the eve of her daughter’s wedding, June Reid’s life is completely devastated when a shocking disaster takes the lives of her daughter, her daughter’s fiancé, her ex-husband, and her boyfriend, Luke—her entire family, all gone in a moment. And June is the only survivor.

What a pleasant surprise... Based on the above summary, I was expecting a depressing book, but Did You Ever Have a Family  turned out to be an emotionally absorbing, accomplished debut novel.

Short chapters told in multiple voices, each connected with those who died in the tragedy, allow for a gradual reveal of characters, backstories, and relationships. With each chapter, the novel grows in interest and complexity.

The initial voice belongs to a 15-year-old pot-smoking high school kid who works part time at a landscape business owned by the mother of the bride's boyfriend. Not exactly the type of character I'm particularly interested in or drawn to, yet he somehow pulled me right into the story and I just kept on reading.

And all of the other characters... alone, misunderstood, and yet somehow connected. Often impacting the lives of others in ways they can't even imagine.  Sad, but redemptive, too.

Did You Ever Have a Family  is a quick read. I devoured it in two sittings and loved every page. It was longlisted for both the Man Booker Prize and National Book Award.


“Rough as life can be, I know in my bones we are supposed to stick around and play our part. Even if that part is coughing to death from cigarettes, or being blown up young in a house with your mother watching. And even if it's to be that mother. Someone down the line might need to know you got through it. Or maybe someone you won't see coming will need you. Like a kid who asks you to help him clean motel rooms. Or some ghost who drifts your way, hungry. And good people might even ask you to marry them. And it might be you never know the part you played, what it meant to someone to watch you make your way each day. Maybe someone or something is watching us all make our way. I don't think we get to know why. Is is, as Ben would say about most of what I used to worry about, none of my business.”