The Deep End by Julie Mulhern 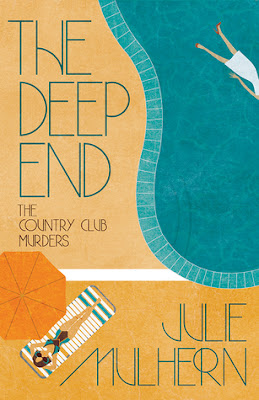 My morning swim doesn't usually involve corpses. If it did, I'd give up swimming for something less stressful, like coaxing cobras out of baskets or my mother out of bed before ten.

Watching the sun rise over the seventh green is often the best part of my day. I dive into the pool while the water is still inky. When the light has changed from deepest indigo to lavender, I break my stroke, tread water and admire the day as it bleeds from gold to yellow to pink. It's a ritual, a metaphorical cleansing, a moment of stolen peace.

It's been a long time since I last read a cozy mystery and, to tell you the truth, I'd forgotten how much fun they can be! Last Tuesday, within five minutes of each other,  I read reviews of Guaranteed to Bleed, Country Club Murders #2 from Katherine and Greg and knew I had to give this series a try.  If the 1970s setting wasn't enough to convince me, the Country Club aspect was. Stories about "rich people behaving badly", a genre coined by Sarah, are a particular weakness of mine.

The Deep End  brings back the seventies with Dr. Scholls, caftans, references to Watergate, popular music, and television series. The period details were just enough to provide context and interest, but not at all overdone.

The main character, Ellison Russell, is sympathetic and likable. I also developed a soft spot for "heroes" Detective Anarchy Jones and lawyer/friend/possible love interest Hunter Tafft. As usual, I wasn't able to figure out who the murderer actually was and should probably give up even trying.

The story reads like women's fiction, the murders are gentle, and I enjoyed every moment of this book - pure escapism! Did I mention how much I love the cover?

The ebook is only $2.99 right now, so it was on my kindle within minutes of reading the reviews. And talk about perfect timing... I took my mother to a doctor's appointment which involved several hours of testing later that day. The Deep End  was ideal reading material. It held my attention without requiring a great deal of concentration and was so entertaining. I can't wait to read the second book in this series.

Every Tuesday, Diane at Bibliophile by the Sea posts the opening paragraph (sometime two) of a book she decided to read based on the opening. Feel free to grab the banner and play along.
Posted by JoAnn at 5:00 AM

Email ThisBlogThis!Share to TwitterShare to FacebookShare to Pinterest
Labels: book review, mysteries, Quote of the Week