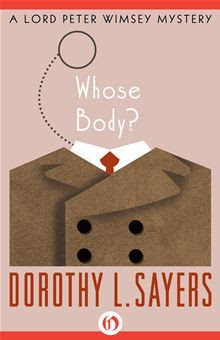 "Oh, damn!" said Lord Peter Wimsey at Picadilly Circus. "Hi, driver!"
The taxi man, irritated at receiving this appeal while negotiating the intricacies of turning into Lower Regent Street across the route of a 19 'bus, a 38-B and a bicycle, bent an unwilling ear.
"I've left the catalogue behind," said Lord Peter deprecatingly, "uncommonly careless of me. D'you mind puttin' back to where we came from?"

Whose Body?
by Dorothy L. Sayers

I'm getting an early start on my R.I.P. reading this year and have finally made the acquaintance of Lord Peter Wimsey. After just a few chapters, I have a feeling I'll be reading more of this classic British detective series.

Here is a bit of the goodreads summary:


Lord Peter Wimsey spends his days tracking down rare books, and his nights hunting killers. Though the Great War has left his nerves frayed with shellshock, Wimsey continues to be London’s greatest sleuth—and he’s about to encounter his oddest case yet.

A strange corpse has appeared in a suburban architect’s bathroom, stark naked save for an incongruous pince-nez. When Wimsey arrives on the scene, he is confronted with a once-in-a-lifetime puzzle. The police suspect that the bathtub’s owner is the murderer, but Wimsey’s investigation quickly reveals that the case is much stranger than anyone could have predicted.