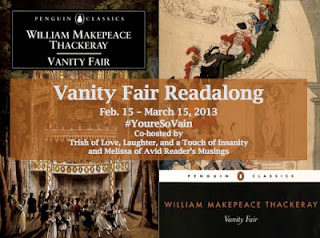 "Ah! Vanitas Vanitatum! Which of us is happy in this world? Which of us has his desire? or, having it, is satisfied? - Come children, let us shut up the box and the puppets, for our play is played out."

With this line, William Makepeace Thackery concludes Vanity Fair and our #YoureSoVain read-along draws to a close. I actually finished the book with a day to spare, but the drama of one last Big East Tournament (for Syracuse University, anyway) made writing an on-time wrap-up post impossible. So here I am, a day late...

What did I think? The second half definitely had it ups and downs. A couple of chapters were dull to the point of being almost unreadable, but I really  enjoyed this novel.

Thackery's characters, although not especially likable, are wonderful. Becky is a horrid, conniving creature and I disliked her more and more as the novel progressed. I believe she even resorted to murder by the end of this 'history'. Amelia was an insufferable martyr, while her brother Jos played the part of the fool perfectly. All those Crawleys were very entertaining, and Rawdon eventually won my sympathy. As for honest Dobbin... I actually cheered when he finally told off Amelia. Vanity Fair  is truly a novel without a hero.

The narrator is delightful, and may be my favorite part of the novel. I enjoyed his frequent asides - often humorous, sometimes making an example of a character in order to teach a lesson or back a theory, and sometimes posing a question to the reader.


"Oh, be humble, my brother, in your prosperity! Be gentle with those who are less lucky, if not more deserving. Think, what right have you to be scornful, whose virtue is a deficiency of temptation, whose success may be a chance, whose rank may be an ancestor's accident, whose prosperity is very likely a satire." p. 668

"Which, I wonder, brother reader, is the better lot, to die prosperous and famous, or poor and disappointed? To have, and to be forced to yield; or to sink out of life, having played and lost the game?" p. 710

A note on the audio production:
For the audio portion of this read/listen combo, I chose the Tantor Audio production narrated by Wanda McCaddon. It was outstanding. McCaddon, whose readings of The Seamstress and Lady Almina and the Real Downton Abbey   recently earned her multiple Audie Award nominations, has an impressive range of voices and accents. I would not hesitate to choose other titles listed among her credits.


My rating:
This is a tough one. Immediately after finishing, I rated Vanity Fair  4/5 stars. After thinking about it for a few days, I'm inclined raise it to 4.5 stars.

Thank you Trish and Melissa for co-hosting this read-along!

“The world is a looking-glass, and gives back to every man the reflection of his own face. Frown at it, and it will in turn look sourly upon you; laugh at it and with it, and it is a jolly kind companion; and so let all young persons take their choice.”