Ragtime, winner of the 1975 National Book Critics Circle Award, intermingles historical figures with fictional characters to capture the mood and spirit of New York City in the early years of the twentieth century.

The novel opens as Harry Houdini crashes his car into a telephone pole outside a home in New Rochelle. The family invites him in,  and the line between fact and fiction begins to blur. Henry Ford, J.P. Morgan, Emma Goldman, Evelyn Nesbit, and even Sigmund Freud wander in and out of the story. They cross paths with our fictional family, a Ragtime musician from Harlem, and a poor immigrant desperately trying to protect his young daughter.

The novel was quick reading and entertaining, but the neither the writing nor plot really stood out for me. I ended up leaving it in our rented condo for a future vacationer. My book club's reaction was mixed, too. Eight of us read the book, but only three would recommend it to a friend. 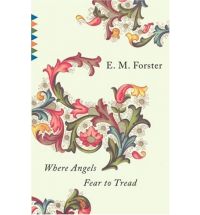 Where Angels Fear To Tread
by E.M. Forster

Forster's first novel deals with his signature themes of class, manners, and the collision of cultures.

Plot Summary (from amazon):
When a young English widow takes off on the grand tour and along the way marries a penniless Italian, her in-laws are not amused. That the marriage should fail and poor Lilia die tragically are only to be expected. But that Lilia should have had a baby -- and that the baby should be raised as an Italian! -- are matters requiring immediate correction by Philip Herriton, his dour sister Harriet, and their well-meaning friend Miss Abbott.

I've read several of Forster's novels and especially enjoyed Howards End and A Room With A View. When Thomas mentioned that reading this novel in the sun would enhance the experience, I decided to bring it to Florida (there is no sun in central New York this time of year!)  Of course, he was right. Reading about the lush Italian countryside while soaking up the sun myself was sublime. Maybe not quite as polished as his later novels, but definitely recommended for any E.M. Forster fan.