Yes, I know today is Virginia Woolf's birthday and she will no doubt receive the greater amount of attention, but W. Somerset Maugham  was also born on this date. 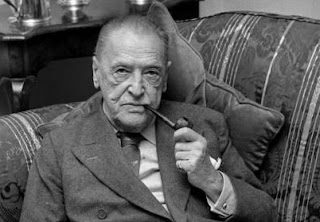 
It's the birthday of W. Somerset Maugham (books by this author), born in Paris (1874). His father was in Paris as a lawyer for the British Embassy. When Maugham was eight years old, his mother died from tuberculosis. His father died of cancer two years later. The boy was sent back to England into the care of a cold and distant uncle, a vicar. Maugham was miserable at his school. He said later: "I wasn't even likeable as a boy. I was withdrawn and unhappy, and rejected most overtures of sympathy over my stuttering and shyness." Maugham became a doctor and practiced in the London slums. He was particularly moved by the women he encountered in the hospital, where he delivered babies; and he was shocked by his fellow doctors' callous approach to the poor." He wrote: "I saw how men died. I saw how they bore pain. I saw what hope looked like, fear and relief; I saw the dark lines that despair drew on a face; I saw courage and steadfastness. I saw faith shine in the eyes of those who trusted in what I could only think was an illusion and I saw the gallantry that made a man greet the prognosis of death with an ironic joke because he was too proud to let those about him see the terror of his soul."


Maugham's The Painted Veil was the first book I reviewed on this blog back in 2008. It was also one of my favorite books that year. I've read a few of his short stories and have Of Human Bondage waiting on the shelf. Have you read Somerset Maugham?