Of Vacations and Veterinarians

What a difference a day makes. Saturday morning, I woke to the sound of waves and watched the sun rise over the Gulf of Mexico. Sunday, it was twelve below zero as the snowplow roared down the road. I'm ready to go back to Sanibel!

It was a very relaxing week. There were walks on the beach and bike rides, but mostly I ate, drank, slept, and read. I finished Ragtime by E.L. Doctorow for book club and Where Angels Fear to Tread by E.M. Forster. I'm at the halfway mark in Every Last One by Anna Quindlen, read the first few letters in Clarissa by Samuel Richardson, and made a significant dent in the pile of New Yorker magazines.

Everything was perfect until I received a call from the kennel just before we boarded the plane to come home. Zelda injured her paw/pad and they were taking her to the vet. By the time we landed in New York, I had a message from the vet. Thankfully there were no broken bones, but since greyhounds have very delicate legs, there was no extra skin to stitch the laceration together. Her wound was cleaned and covered, antibiotics and pain meds were prescribed, and a plastic boot was fashioned from an IV bag to keep the bandages dry in the snow. Zelda is hobbling around on three legs and we're slated for return vet visits two or three times a week for the next couple of months. We have an appointment later today and I'm anxious to speak with the vet in person. Once Zelda start to heal, I'm hoping they'll show me how to change the dressing. I love our vet, but would rather not visit three times a week all winter. It may be a few more days before regular blogging resumes. 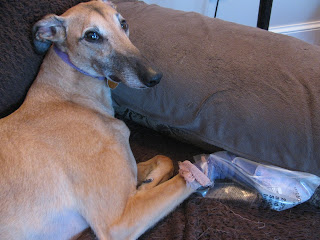