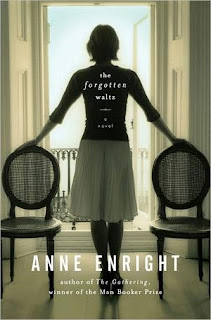 "I met him in my sister's garden in Enniskerry. That is where I saw him first. There was nothing fated about it, though I add in the late summer light and the view. I put him at the bottom of my sister's garden, in the afternoon, at the moment the day begins to turn. Half five maybe. It is half past five on a Wicklow summer Sunday when I see Sean for the first time. There he is, where the end of my sister's garden becomes uncertain. He is about to turn around - but he doesn't know this yet. He is looking at the view and I am looking at him. The sun is low and lovely. He is standing where the hillside begins its slow run down to the coast, and the light is at his back, and it is just that time of day when all the colours come into their own."

The Forgotten Waltz
by Anne Enright

I picked this book up on Friday intending to read just a page or two, but was entranced by Enright's writing and ended up at page fifty before realizing I'd actually decided to start the book. Does the first paragraph appeal to you?