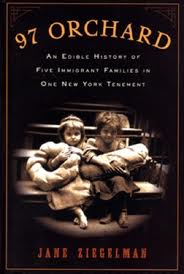 
97 Orchard tells the story of five immigrant families, each of them, as it happens, residents of a single New York Tenement in the years between 1863 and 1935. Though separated by time and national background, the Glockners, the Moores, the Gumpertzes, the Rogarshevskys, and the Baldizzis, were all players in the Age of Immigration, a period of sweeping demographic change for both the Old and New Worlds.

Starting in Europe in the early 1800's, whole chunks of humanity streamed from the countryside to the cities - the continent's new manufacturing centers - in pursuit of work. Those who could afford to embarked on a trans-Atlantic migration, lured to the United States by the promise of American prosperity and freedom. 97 Orchard chronicles what became of those immigrants, but from a special vantage point: it retells the immigrant story from the elemental perspective of the foods they ate.


97 Orchard: An Edible History of Five Immigrant Families in One New York Tenement
by Jane Ziegelman

This sounds fascinating! I've seen nothing but praise for 97 Orchard and plan to start reading later today. My book club will discuss the book in early November. What do you think? Is the topic of interest to you?