Group Read: The House of the Seven Gables 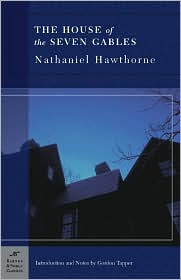 Group reads satisfy on so many levels. For me, the increased sense of community is the biggest draw. Comparing progress notes with other readers on twitter is like running into a friend at Wegmans. Not only do these random updates add to my enjoyment, they strengthen friendships. Group reads also provide an opportunity to read a book I might not get to on my own. And finally, participating in a group read always leads to deeper understanding of the selected title. Other readers, without fail, pick up on things I barely notice.

My main problem with group reads is timing. Often finishing just a little too late, I seem to lack the discipline other readers master so easily. By them time I'm ready to discuss, the group has moved on. Or else, as in the case of The House of the Seven Gables, I finish weeks ahead of schedule and struggle to pull my thoughts together at discussion time.

The first chapters of The House of the Seven Gables required extraordinary concentration and effort. Whether it was Hawthorne's writing style or my own evening fatigue, I just couldn't get into the rhythm of the narrative and turned to an audio version for help. Anthony Heald's excellent narration carried me forward and I was able to follow the story with ease. The routine of listening in the car and reading at home allowed me to finish the book quickly.

The atmosphere of the novel surely lends itself to the season: an old curse, supernatural occurrences, haunting, and family discord. Hepzibah and Clifford were highlights in this gloomy novel. Wonderful passages detailed Hepzibah's unfortunate appearance and her descent to shop proprietor. Clifford's eccentricities and child-like behaviours also proved memorable, as did their tragic withdrawal from society.


"Nothing gives a sadder sense of decay, than this loss or suspension of the power to deal with unaccustomed things and to keep up with the swiftness of the passing moment. It can merely be a suspended animation; for were the power to actually perish, there would be little use of immortality. We are less than ghosts for the time being, whenever this calamity befalls us." (p.141)

Despite these bright spots, The House of the Sevens Gables will not be counted among my favorites this year. A neutral to slightly positive reaction is all I can muster. I consider myself a patient reader, but this story took forever to develop. The 'action' occurred quickly and the mysteries were tidily resolved at the end.

Based on previous experience with Hawthorne, my reaction came as no surprise. I disliked The Scarlet Letter in high school and, although a reread five years ago lead to greater appreciation, I still disliked it as an adult. I should have sworn off Hawthorne at that point, but the lure of a group read and a long standing curiosity about The House of the Seven Gables proved irresistible.

Bottom line: I'm glad I read The House of the Seven Gables, but my classics to-be-read list is far too long to spend any more time with an author I don't love. I'm afraid we're through, Mr. Hawthorne.

Thank you, Frances and Audrey, for hosting this group read. Other group read posts can be found here.