Literary Overdose: Is Four Too Many? 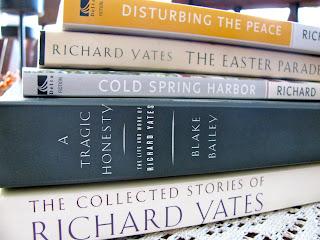 It's Family Weekend at Twin A's college and we're hitting the road again. I wanted to write a quick Sunday Salon-type post before leaving, and last night's twitter conversation provided just the spark I needed.  It began as an impromptu meeting of the Stewart O'Nan fan club (@LitHousewife, @mattviews, and I seem to be the charter members), then several others joined in and our conversation broadened. At some point during the rapidly flying tweets, someone mentioned that they usually read three books by an author before moving on. I thought that was very interesting....why three instead of two? What happens if you read four in a row - author burnout?

Soon I began thinking about my own reading habits and notorious lack of structure and rules. Looking back over the past year, I have spent extended periods with two authors - Richard Yates and Stewart O'Nan. In both cases, strangely enough, it would appear that I followed the same three book rule.

A couple of years ago, I read Revolutionary Road. I thought it was brilliant and have been meaning to return to Yates ever since. I finally did last spring - in a big way. My personal Yatesfest began with The Easter Parade and continued with Disturbing the Peace and Cold Spring Harbor. The grand finale was A Tragic Honesty: The Life and Work of Richard Yates by Blake Bailey. Several short stories were also scattered along the way. I plan to read the remainder of Yates work, but after three novels and a biography, a break from his tragic reality was in order.

My author 'discovery' of the year, Stewart O'Nan, was next.  I absolutely love his writing style and characters. A stormy Labor Day weekend was spent reading Wish You Were Here. The lakeside setting provided an ideal end-of-summer read. Emily, Alone featured many of the same characters and was the perfect follow-up. In total awe of O'Nan, I headed to the library and came home with Last Night At the Lobster... also stunning. That was three and, just as with Richard Yates, I decided to take a break.  O'Nan's new novel will be released in January and is already in my amazon shopping cart for pre-order. This break will end in just a few months.

So that's twice this year I've unintentionally followed the 'three book rule'. Is it some sort of intuitive reading reaction, or simply coincidence? Now I'm curious. When you delve into an author's work, how deep do you go before taking a breather? Is there such a thing as literary overdose?

On to my current reading...
After Tuesday's Two-for-One Intros, it appears that Her Fearful Symmetry has 'won'. It's perfect for the season and, after 100 pages, I'm really enjoying it. However, On Chesil Beach has not been totally abandoned. I'll get back to it as soon I'm done.

I finished the audio version of Stiff: The Curious Lives of Human Cadavers by Mary Roach and must say it is totally unlike anything I've ever read... in a weird but totally interesting kind of way. For our road trip today, I have downloaded Travels with Charley in Search of America by John Steinbeck and hope my husband and Twin B will agree to listen.

We had our first snowfall of the season yesterday. Although I'm not really looking forward to winter, the snow in the trees and mist rising from the lake made for a beautiful view this morning. Have a wonderful weekend! 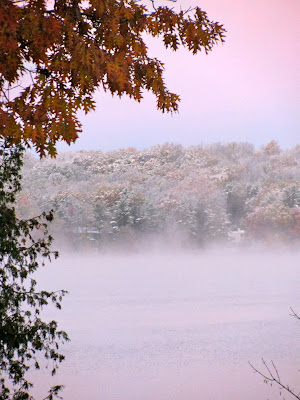