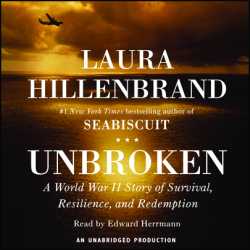 In a nutshell:
"A WWII story of survival, resilience, and redemption"
Read the publisher's full summary here.

My thoughts:
The best thing about book clubs is that they push me outside my comfort zone. Without the 'book club selection' mandate, Unbroken would not have made my reading list. Books dealing with combat, POW camps, torture, and tales of survival send me running in the opposite direction. 'War books' simply aren't for me... unless the focus is on domestic issues or the home front.

However, once I started listening to Unbroken, there was no turning away. Louis Zamperini's journey from juvenile delinquent, to Olympic runner, to WWII bombardier was captivating, but it's the survival story that will stick with me. Floating on a raft in the Pacific Ocean for weeks, plagued by sharks, starvation, and enemy aircraft, Zamperini's ingenuity and resolve were simply amazing.

Zamperini was eventually captured and taken as a prisoner of war. An astonishing 37% of POWs in the Japanese camps died, and the brutalities were described in great detail. I found this section difficult to handle... proceed with caution. Finally, I cheered at Louis' rescue and followed along his journey of recovery.

Hillenbrand's extensive research is very evident throughout the book.

Book club reaction:
Several weeks before the meeting, I realized I wouldn't be able to attend, but decided to finish listening to the book anyway. Reactions varied widely. Several members loved the book, while a couple others found it too disturbing to finish. I may have been in the second group had I been reading rather than listening.

A note on the audio production:
Edward Herrmann's narration struck just the right balance. It was riveting, without being overly dramatic. Searching through his multiple credits, I realized I'd listened to his narration of Couples by John Updike. A few of his other titles have now been added to my audible wish list.

Bottom line:
Recommended, with a caution for the squeamish 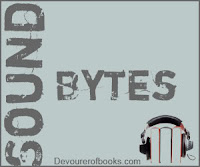 Jen at Devourer of Books is collecting audiobook reviews every Friday for her new Sound Bytes feature. Stop by and read her review, then click over to see what others have posted. Feel free to link up your own audiobook review, too.