Last Night At the Lobster by Stewart O'Nan 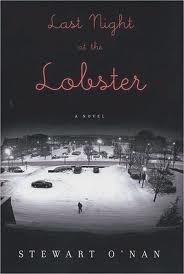 In a nutshell:
This novella takes a close look at The Red Lobster in New Britain, CT- employees, customers,and operation - on it's final night of business.

My thoughts:
Last Night at the Lobster is the third O'Nan novel I've read in as many weeks, and my first impulse upon finishing was to immediately begin the fourth. Once again, there is not a lot of action, but the reader really gets to know and understand the characters.

In this case, the primary focus is on the manager, Manny DeLeon. It's four days before Christmas, a snowstorm is raging, and Manny is determined to keep up appearances and finish the evening like any other....except it's not just any evening. It's the final night of operation for the Red Lobster. The location is 'underperforming' and parent company Darden has decided close down the Lobster and transfer Manny to a nearby Olive Garden, where he will be downgraded to assistant manager.

I loved the behind-the-scenes aspect of this novel. The kitchen tension, corporate guidelines, staff interactions, customer descriptions, and jack-of-all-trades manager provide the reader with insight into the chain restaurant business. O'Nan must have spent many research hours at Red Lobsters.

Last Night at the Lobster is also infused with a feeling of loss. Of course, there is the loss of the restaurant, but Manny is also mourning the recent loss of his abuela as well as his break-up with Jacquie (an employee). At the same time, he must come to terms with his current relationship and impending fatherhood.

By the way, I decided to forgo a fourth O'Nan novel and begin a group read of The House of the Seven Gables by Nathaniel Hawthorne. As Amy said on twitter, "O'Nan will be waiting for you, like a good friend." I like that...


"He tramps out to the end of one wing where Dom's and Roz's cars sit in exile and works back toward the Lobster, the illusory movement of the colored string through the front doors and the glow from the windows and the candlelit faces of people eating inside all suddenly, surprisingly beautiful to him, as if he's still stoned. He rests for a moment to appreciate the vision and hears, in the hush, at a distance, the frantic whizzing of a car spinning its wheels. In the storm light, the restaurant looks warm and alive and welcoming, a place anyone would want to go. It looks like a painting, and he feels proud, as if this is his work, and in a way it is, except it's over, like him and Jacquie, lost, gone forever. Is that why he loves it so much?" page 40-41

Bottom line:
Stewart O'Nan is fast becoming a favorite author. If you aren't familiar with his work, this little book is a perfect introduction.