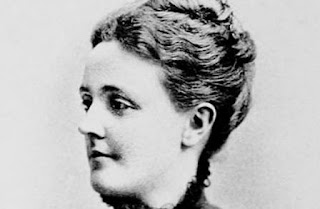 Today is the birthday of Sarah Orne Jewett (1849) (books by this author). She was born in South Berwick, Maine, and she died there, too, 60 years later. She was deeply rooted in the region and its people. "My local attachments," she wrote, "are stronger than any cat's that ever mewed."

Her father was an obstetrician, and he often took her with him on his house calls; they would talk about the land and the sea on the way, and she would talk for hours with his patients and their families. She originally wanted to be a doctor herself, but she was in poor health, suffering from rheumatoid arthritis. She read voraciously when she wasn't out with her father. She attended the Berwick Academy and graduated when she was 16, but she considered her true teachers the fishermen and farmers and their wives, and they were her subjects when she began writing stories as a girl. She published her first story, "Jenny Garrow's Lovers," in Flag of Our Union when she was 18. Later, some of her sketches of the fictional New England town of Deephaven were published in Atlantic Monthly, and eventually collected into a novel, also called Deephaven (1877).


She never married, but she had a very close relationship with writer Annie Fields and her husband, Atlantic Monthly publisher James Field. After James died, Sarah and Annie traveled together extensively, and lived together in Boston for a large part of every year. Her strong regional writing would inspire Willa Cather, who called Jewett's novella The Country of the Pointed Firs (1896) an American classic on the level of Huckleberry Finn and The Scarlet Letter. Cather dedicated O Pioneers! (1913) to Jewett.


Jewett was injured in a carriage accident on her birthday in 1902, which put an end to her writing career. She was paralyzed by a stroke in 1909, and died a few months later.

The Art of the Novella Challenge may be over, but The Country of Pointed Firs is loaded on my iPad. I missed traveling to Maine this summer, and hope the combination of this novella with Thomas' vacation photos will prove to be the next best thing.

Email ThisBlogThis!Share to TwitterShare to FacebookShare to Pinterest
Labels: Art of the Novella, Author Birthdays