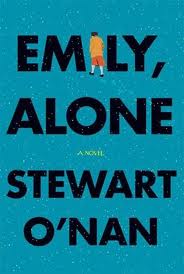 Could it be, even for elderly people, that this was life -
startling, unexpected, unknown?
-Virginia Woolf


I think Emily, Alone is one amazing book.

I wonder how a middle-aged man can know, and perfectly convey, the mind of an 80-year-old widow. Perhaps O'Nan spent years really listening to a mother, grandmother, or great aunt.

I'm glad I read Wish You Were Here first. Set seven years earlier, it provided the background necessary for a deeper understanding of Emily, her family, and their history.

I'm feeling slightly sad...although the book ends on a hopeful note, it's not exactly a cheerful novel. Of course, two daughters leaving for college, a cold, rainy Labor Day, and the unofficial end of summer may have contributed to my blue mood. Still, this quiet, introspective novel will not be for everyone.

I loved these quotes:


"The temptation was to mourn those days, when they were young and busy and alive. As much as Emily missed them, she understood the reason that era seemed so rich - partly, at least - was because it was past, memorialized, the task they'd set themselves of raising families accomplished" p.55

"Often, as she leafed through the sticky, plastic-coated pages, spotting herself with a frizzy perm or wearing a loud, printed blouse, she was struck by how long life was, and how much time had passed, and she wished she could go back and apologize to those closest to her, explain that she understood now. Impossible, and yet the urge to return and be a different person never lessened, grew only more acute." p. 65

"She fretted especially about Sarah and Justin, how they would turn out, and thought it unfair that she would probably not be around to witness it. She'd watched her own children grow up, maybe that was enough - as if one were allowed to see only so much of life, the future, like the past, necessarily hidden and mysterious." p.90

"Though they all lived alone, and preferred to, they were all worried about one another, equally. Why had it taken them so long to arrive at this point? Shouldn't it have always been that way?" p. 126

I will read more O'Nan.