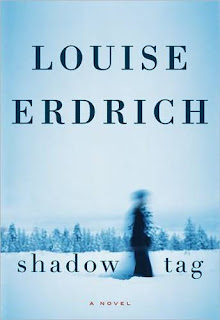 When Irene America discovers that her artist husband, Gil, has been reading her diary, she begins a secret Blue Notebook, stashed securely in a safe-deposit box. There she records the truth about her life and marriage, while turning her Red Diary—hidden where Gil will find it—into a manipulative charade. As Irene and Gil fight to keep up appearances for their three children, their home becomes a place of increasing violence and secrecy. And Irene drifts into alcoholism, moving ever closer to the ultimate destruction of a relationship filled with shadowy need and strange ironies.

Alternating between Irene's twin journals and an unflinching third-person narrative, Louise Erdrich's Shadow Tag fearlessly explores the complex nature of love, the fluid boundaries of identity, and the anatomy of one family's struggle for survival and redemption.

In a nutshell:
Shadow Tag is an intense story of deception and the destructive power of love.

My thoughts:
The stories in The Red Convertible introduced me to Louise Erdrich's fabulous writing, but it's taken another two years to finally read one of her novels. I won a copy of her latest (thanks Wendy!) and it arrived, perfectly timed, just before vacation. Shadow Tag was a positively riveting tale of a marriage gone horribly bad. I devoured the novel in just two sittings - a rare occurrence for me.

Along with the beautiful writing, the backdrop of Native American culture makes this much more than just another novel of domestic woe.  Irene America has been the subject of countless paintings produced by her artist husband. Ojibwe teachings provide important implications.


A soul could be captured through a shadow. It was in the Ojibwe language. Waabaamoojichaagwaan - the word for mirror can also refer to shadow and to the soul: your soul is visible and can be seen. Gil had placed his foot on Irene's shadow when he painted her. And though she tried to pull away, it was impossible to tug that skein of darkness from under his heel. (p. 40)

I also loved that one character had a rescued greyhound.  Erdrich clearly has some understanding of the breed and challenges involved in living with a retired racer. I though I was going to be disappointed by the ending, but an added revelation about the narrative voice was perfect.

There is no doubt I'll be reading more of Louise Erdrich. The Plague of Doves is on my shelf, but I've also heard Love Medicine is excellent. Have you read any of her novels? Which is your favorite?

Last word: If you haven't read Louise Erdrich yet, you really should.
Posted by JoAnn at 11:46 AM