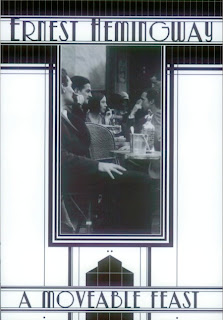 Then there was the bad weather. It would come in one day when the fall was over. We would have to shut the windows in the night against the rain and the cold wind would strip the leaves from the trees in the Place Contrescarpe. The leaves lay sodden in the rain and the wind drove the rain against the big green autobus at the terminal and the Café des Amateurs was crowded and the windows misted over from the heat and the smoke inside. It was a sad, evilly run cafe where the drunkards of the quarter crowded together and I kept away from it because of the smell of dirty bodies and the sour smell of drunkenness.  The men and women who frequented the Amateurs stayed drunk all of the time, or all of the time they could afford it, mostly on wine which they bought by the half-liter or liter. Many strangely named aperitifs were advertised, but few people could afford them except as a foundation to build their wine drunks on. The women drunkards were called poivrottes which meant female rummies.

A Moveable Feast
by Ernest Hemingway

Would you keep reading? I love the images of Paris Hemingway's writing paints in my mind. Paris in July begins on Friday.

Email ThisBlogThis!Share to TwitterShare to FacebookShare to Pinterest
Labels: Ernest Hemingway, Quote of the Week