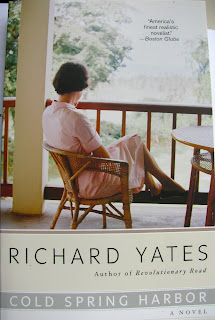 All the sorrows of Evan Shepard's loutish adolescence were redeemed at seventeen, in 1935, when he fell in love with automobiles. His persistent bullying of weaker boys, his thick-witted ways of offending girls, his inept and embarrassing ventures into petty crime - none of those things mattered any more, except as bad memories.  He had found a high romance in driving fast and far, over most of Long Island, and he soon attained intimacy with the mechanical parts of any car he could get his hands on.  For whole days at a time, meticulously taking a car apart or putting it together in the dust of his parents' driveway, Evan would be lost to the world.

Cold Spring Harbor is my third Richard Yates novel this year, and fourth  overall. I've also read many of his short stories and a wonderful biography. It's time to start working on a Yates wrap-up post!

Email ThisBlogThis!Share to TwitterShare to FacebookShare to Pinterest
Labels: Quote of the Week, Richard Yates