"The Night We All Had Grippe" by Shirley Jackson 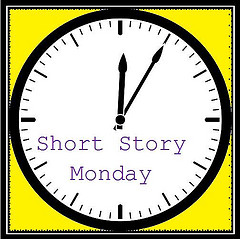 Shirley Jackson (1916-1965) is not generally associated with humor. "The Lottery", her most famous story, is nothing short of gruesome, and funny isn't an adjective I'd choose to describe We Have Always Lived In The Castle either.  "The Night We All Had Grippe" introduces a side of Shirley Jackson I had never imagined.

We begin with a family that is 'very fond of puzzles'. The mother, our narrator, explains The Great Grippe Mystery and asks the reader's help in trying to figure out what has become of a blanket (as they are 'very short of blankets').

A detailed description of the floor-plan, bedroom furniture arrangement, bedtime drink preferences, color of bedding and ambient temperature in each room follows. It reads like a word problem from grade school math - the kind that's filled with confusing, extraneous information. I'm already smiling at this point.

The entire family becomes sick at the same time (an all to familiar occurrence, at least around here).


"In our family, we take ill in different manners; my husband is extremely annoyed at the whole procedure, and is convinced that his being sick is someone else's fault, Laurie tends to become a little lightheaded and strew handkerchiefs around his room, Jannie coughs and coughs, the baby turns bright red, and I suffer in stoical silence, so long as everyone knows clearly that I am sick. We are each of us privately convinced that our own ailment is far more severe than anyone else's."

A night of musical beds ensues as blankets, pillows, and nightstand supplies move from room to room with their owner. This section had me literally laughing out loud.

The story ends with a summation of the problem:


"The puzzle, is, of course, what became of the blanket from Baby's bed? I took it off her crib and put it on the bottom half of the double-decker, but the dog did not have it when when he woke up, and neither did any of the other beds. It was a blue-patterned patchwork blanket, and has not been seen since, and I would most particularly like to know where it got to. As I say, we are very short of blankets."

"The Night We All Had Grippe" was originally published in Harper's in 1952 and collected in Come Along With Me in 1968. It is this week's featured story from Library of America and can be read in its entirety here.

Short Story Monday is hosted by John Mutford at The Book Mine Set.
Posted by JoAnn at 6:52 PM