The Report by Jessica Francis Kane 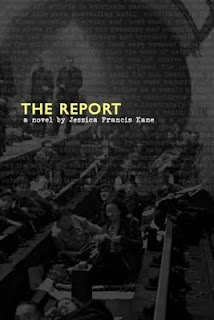 "But talking to him was like talking to any young person about the war years: they spoke from a background of black-and-white pictures, while your memories were very much in color. They asked about food rationing, while you saw the coupons. They spoke about the public morale, while what you remembered were the faces. Try as they might, they heard only a chord or two, while the whole symphony still roared in your head." page 139

In a nutshell:
In March 1943, on a night no bombs were dropped, one hundred seventy-three people died in a crush at an air-raid shelter in London's Bethnal Green tube station. Thirty years later, the production of a television documentary causes both survivors and government officials to re-examine their actions. Both timelines are woven together in The Report.

My thoughts:
Reading fiction has expanded my knowledge of World War II again. Last year, I learned of the 1942 Vel d'Hiv roundup in Paris through Sarah's Key. Now, reading The Report, I've been made aware of the 1943 Bethnal Green tube station disaster.

After a horrific crush in a tube station air-raid shelter, local magistrate Laurence Dunne is assigned the task of conducting an inquiry and filing a report. There were no bombs dropped that night, and his interviews turn up surprising evidence pointing to truths that could prove damaging. Should they be included in the report? Is is better to give people all the answers, or just what he thinks they need? How would assigning blame, or not, change the course of lives?

Hundreds of Londoners are forever altered by the events of that one fateful night yet, despite the subject matter, the book is not depressing.

"Surviving some disasters, she sensed, you don't get to be happy again. You simply change, and then you decide if you can live with the change." (p.225)

Thirty years later, Dunne is approached by a young man producing a television documentary to commemorate the anniversary. Dunne eventually warms up to him and agrees to cooperate with the project. In doing so, he holds his actions up for re-examination. Old wounds are also reopened for survivors.

Kane flawlessly weaves the two time periods together into an unforgettable narrative.

Bottom line:
A fascinating fictional look at a very real disaster and its aftermath, The Report would make an excellent book club selection. Very highly recommended.
Posted by JoAnn at 7:30 AM