Today marks the beginning of Virago Reading Week hosted by Rachel and Carolyn.  It is also Edith Wharton's birthday. Do you suppose this is purely coincidence?  I think not, and give full credit to our gracious hostesses.  This article from today's Writer's Almanac seemed the perfect way to start the week.


It's the birthday of the writer who said, "Life is always a tightrope or a feather bed. Give me the tightrope." That's Edith Wharton, (books by this author) born in New York City (1862). She wrote about frustrated love in novels like The House of Mirth (1905), Ethan Frome (1911), and The Age of Innocence (1920), for which she became the first woman to win the Pulitzer Prize. 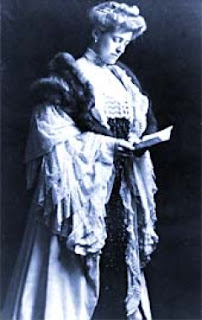 She came from a rich and snobbish New York family who lived off the inheritance of their real estate and banking tycoon ancestors, and she spent several years of her early childhood traveling around Europe. When she was 10, her parents re-settled in New York, around 23rd and Park Avenue. She was a teenage bookworm, reading insatiably from her family's expansive library and feeling alienated and adrift in the New York high-society circles her family moved in. At 23, she married a family friend, a classy, good-looking sportsman named Edward "Teddy" Robbins Wharton, who wasn't particularly fond of books. He had a tendency for manic spells, extravagant spending sprees, and infidelity. It was a long and miserable marriage.

She met Henry James in Europe and became good friends with him. He encouraged her to write about the New York City she knew so well and disliked. He said, "Don't pass it by — the immediate, the real, the only, the yours." And it was Henry James who introduced her to his friend Morton Fullerton, a dashing, promiscuous, intellectual American expat journalist who reported for the London Times from Paris. Edith Wharton fell hard for the man, filled her diary with passages about how their romance and conversation made her feel complete, wrote him pleading letters, and about a year into their affair, when she was in her late 40s, moved full-time to Paris, where he resided. The affair ended in 1911, the year she published Ethan Frome. She once wrote to him:

"Do you know what I was thinking last night, when you asked me, &; I couldn't tell you? — Only that the way you've spent your emotional life while I've ... hoarded mine, is what puts the great gulf between us, & sets us not only on opposite shores, but at hopelessly distant points of our respective shores. Do you see what I mean?

"And I'm so afraid that the treasures I long to unpack for you, that have come to me in magic ships from enchanted islands, are only, to you, the old familiar red calico & beads of the clever trader, who has had dealing with every latitude, & knows just what to carry in the hold to please the simple native — I'm so afraid of this, that often & often I stuff my shining treasures back into their box, lest I should see you smiling at them!

"Well! And what if you do? It's your loss, after all! And if you can't come into the room without my feeling all over me a ripple of flame, & if, wherever you touch me, a heart beats under your touch, & if, when you hold me, & I don't speak, it's because all the words in me seem to have become throbbing pulses, & all my thoughts are a great golden blur — why should I be afraid of your smiling at me, when I can turn the beads & calico back into such beauty —?"

He left her in 1911, and she stayed married to Teddy for a couple more years, though the two lived apart from each other during the last part of their 28-year marriage. She loved living in Paris, and there she mingled with people like André Gide, Jean Cocteau, Theodore Roosevelt, and F. Scott Fitzgerald, whom she once told: "To your generation, I must represent the literary equivalent of tufted furniture and gas chandeliers." But she wasn't prim or overly proper, and she famously enjoyed one of Fitzgerald's scandalous stories, about an American couple in a Paris brothel, which he drunkenly related the first time he met her.

Modernist writers were among her contemporaries, but she didn't use modernist techniques like stream-of-consciousness in her own writing, and she wasn't a fan of it in others'. She once said about James Joyce's Ulysses (1922), "Until the raw ingredients of a pudding make a pudding, I shall never believe that the raw material of sensation and thought can make a work of art without the cook's intervening."

She died in Paris at the age of 75. At the time of her death, she was working on a novel called The Buccaneers, about five rich American girls who set out to marry landed British men, so that they can have English feudal titles in their names, like "Duchess." In her last days, she lay in bed and worked on the novel, and each page that she completed she dropped onto the floor so that it could be collected later, when she was through.

Many of her novels have been made into movies. The House of Mirth, The Glimpses of the Moon, and The Age of Innocence were all adapted into silent films around the 1920s. John Madden directed a version of Ethan Frome in 1993, the same year Martin Scorsese directed a film adaptation of The Age of Innocence. In 2000, Gillian Anderson stared in The House of Mirth, directed by Terence Davies.

In her short story "The Fullness of Life" she famously wrote:
"You have hit upon the exact word; I was fond of him, yes, just as I was fond of my grandmother, and the house that I was born in, and my old nurse. Oh, I was fond of him, and we were counted a very happy couple. But I have sometimes thought that a woman's nature is like a great house full of rooms: there is the hall, through which everyone passes in going in and out; the drawing room, where one receives formal visits; the sitting-room, where the members of the family come and go as they list; but beyond that, far beyond, are other rooms, the handles of whose doors perhaps are never turned; no one knows the way to them, no one knows whither they lead; and in the innermost room, the holy of holies, the soul sits alone and waits for a footstep that never comes."
"And your husband," asked the Spirit, after a pause, "never got beyond the family sitting-room?"
"Never," she returned, impatiently; "and the worst of it was that he was quite content to remain there. He thought it perfectly beautiful, and sometimes, when he was admiring its commonplace furniture, insignificant as the chairs and tables of a hotel parlor, I felt like crying out to him: 'Fool, will you never guess that close at hand are rooms full of treasures and wonders, such as the eye of man hath not seen, rooms that no step has crossed, but that might be yours to live in, could you but find the handle of the door?'"

And Edith Wharton said, "There are two ways of spreading light: to be the candle or the mirror that receives it."