The Doctor's Wife by Sawako Ariyoshi 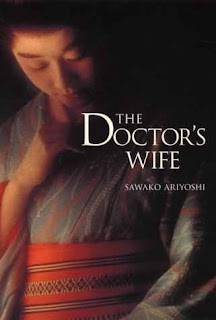 In a nutshell:
This novel is based on the life of Dr. Hanaoka Seishu (1760-1835), the Japanese doctor who performed the first operation under general anesthesia, but focuses primarily on the relationship between his wife and mother.

My thoughts:
After a string of long books, I was craving one that could be read in just a couple of sittings. The Doctor's Wife had been on hold for months (thanks to Mel's review), and my library came through just before the TBR Dare got started - a rare case of perfect timing.

As a young girl, Kae is mesmerized by the beauty of Dr. Hanoka's wife, Otsugi.  Years later she is overjoyed when Otsugi selects her to be the bride of their eldest son.  Umpei is away studying medicine but Kae, it seems, possesses all the qualities necessary for a doctor's wife.


"The first requirement is good health.  Other essentials are courage, a strong will, and an understanding of the nature of the medical profession, although the woman may not know how to take a pulse... A confident, capable woman does not become alarmed at the sight of blood or serious infirmities.  Instead, she cleans the wound..." (p. 16-17)

A marriage ceremony takes place without the groom. Three years will pass before husband and wife finally meet. During that time, a close and loving relationship develops between Kae and her mother-in-law.


Otsugi spoke more softly. "I am called 'Mother' by you though you are not really my child. Yet I feel you are as dear to me as my own daughters.  Our relationship has deep roots. It was probably decreed by fate." (p. 45)

When Umpei eventually comes home to take over his father's practice, Kae and Otsugi's relationship becomes fraught with jealousy and deteriorates quickly.


"Otsugi's action, which prevented her son from being with his wife, may not have been deliberate. Yet it expressed an undeniable antagonism toward her daughter-in-law. So it came to pass that the beautiful intimacy between the two - the bride and the mother-in-law who had sought her - terminated upon the arrival of the loved one they had to share." (p.58)

Umpei (also called Seishu) is intrigued with surgery, especially breast surgery.  Common belief held that a woman's breasts were vital to life and pain associated with surgery would result in death. Umpei experiments with anesthesia on animals, and is eventually ready to try his new medicine on humans.

The novel gets very interesting as Kae and Otsugi vie to become the first human subjects, thus proving their greater love for Umpei. There is an especially hilarious dialog with each one-upping the other listing reasons why she should be chosen.  Both women, however, are actually afraid the medicine will kill them.

I won't spoil things by telling you who gets to be the 'guinea pig' or the outcome of the clinical trials. It's certainly worth reading this short book to find out. The prose is simple and straight forward, at times even beautiful.  The women's relationship takes center stage, but the book is also an interesting look at male-oriented family life and the 'business' of medicine in Japan in the early 1800's.

Bottom line:
A short, enjoyable novel, that offers an interesting look at medicine and female relationships in a male-oriented Japanese family.
Posted by JoAnn at 2:33 PM