An Evening with Richard Russo 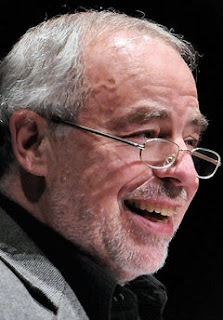 Expectations are hard to live up to.... the new book that is over-hyped, the party you've been planning for six months, the prom. You understand where I'm going with this. Richard Russo was in town Tuesday night for the Rosamond Gifford Lecture Series. I'd been anticipating this one since September. Richard Russo was the name that tipped the scales toward becoming season ticket holders - no more single lectures for us! My book club took the plunge, subscribed to the series, and at long last, the evening arrived.

The Sunday paper forewarned us that Russo would deliver one of his prepared talks on humor. That sounded good to me. Russo has written some very funny stuff! He has the ability to blend the tragic and comic to produce characters and scenes that will live in my mind for years.

The talk was titled "The Gravestone and The Commode". The gravestone, engraved Nimon, born in Syria 1899, leaned against an apple tree in the backyard of his old Maine home. The commode was temporarily placed on the nearby deck during a bathroom renovation. Russo never really "saw" the gravestone until it was humorously paired in his mind with the commode.

Russo believes it's nearly impossible to grow up in this world without a sense of humor, yet humor cannot be taught. It's all in the way you look at something. He spoke of striving to see the world with the wonder of a child's eye.

He believes that in order to be a writer, it is necessary to grow up with at least one voracious reader in the family - for him it was his mother. He told us several other funny stories, including an instance where his own humor ran unbridled at a dinner party (this seemed to particularly delight the crowd) and how humor lightened the mood at his father's wake.

What I had not anticipated was that the entire talk would be read, word for word, with frequent correction of phrases not in the script. I supposed the disappointment to be solely my own, but later learned several others had felt it, too.

The evening concluded with a question and answer period. Finally, Russo seemed to really talk to us! He touched on growing up in Gloversville, NY (where his grandfather actually cut gloves by hand), the article he's working on for Granta magazine, how teaching helped his own writing, and whether he misses the classroom (he doesn't, nor does he miss English department meetings - he does miss the students). If only this segment had lasted a bit longer...

*Photo by Mike Greenlar/Post-Standard
Posted by JoAnn at 11:40 AM