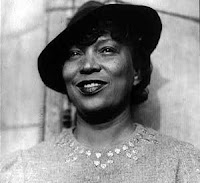 With Black History Month in mind, "The Eatonville Anthology" by Zora Neale Hurston (1891-1960) is the subject of this week's Short Story Monday post. It is a series of vignettes, or snapshots, from a small African-American community in central Florida in the early 20th century. There doesn't seem to be anything holding the snapshots together but, taken as a whole, they provide an interesting look at life in the town.

The fourteen vignettes are headed with Roman numerals; some also have a title. They range in length from just a few sentences to a couple of pages. Each begins with a general statement of character, and then continues with either a few details or an entire sketch. Most are about specific people, but one is about a family dog, and another features the fable-like quality of talking animals. According to Hurston biographer Robert E. Hemenway, "The Eatonville Anthology" mixes well-known folklore with original material.

My favorite was number XII, THE HEAD OF THE NAIL. It begins:

"Daisy Taylor was the town vamp. Not that she was pretty. But sirens were all but non-existent in the town. Perhaps she was forced to it by circumstances. She was quite dark with little bushy patches of hair squatting over her head. These were held down by shingle-nails often. No one knows whether she did this for artistic effect or for lack of hairpins..."

Daisy flirted with married men. There were only two single men in town. She'd come on to Mr. Crooms one time too many and his wife, Laura, seeing an opportunity, could no longer contain her anger.

"There was a box of ax-handles on display on the porch, propped up against the door jamb. As Daisy stepped upon the porch, Mrs. Crooms leaned the heavy end of one of those handles heavily upon her head. She staggered from the porch to the ground and the timid Laura, fearful of counter-attack, struck again and Daisy toppled into the town ditch. There was not enough water in there to do more than muss her up. Every time she tried to rise, down would come that ax-handle again...."

"Is she hurt much?" Joe Clarke asked from the doorway.
"I don't know," Elijah answered, "I was just looking to see if Laura was lucky enough to hit one of those nails on the head and drive it in."
Before a week was up, Daisy moved to Orlando. There in a wider sphere, perhaps, her talents as a vamp were appreciated."

In 1887, Eatonville became the first incorporated African-American community in the nation. Some 100 such communities were founded during that era, but only about a dozen remain. Today, Eatonville is best known for its annual showcase of arts, literature and culture that celebrates its native daughter, Zora Neale Hurston. 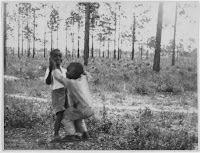 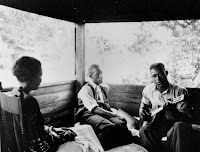 Short Story Monday is hosted by John Mutford at The Book Mine Set.
Posted by JoAnn at 5:50 PM