Nine Parts of Desire: The Hidden World of Islamic Women by Geraldine Brooks 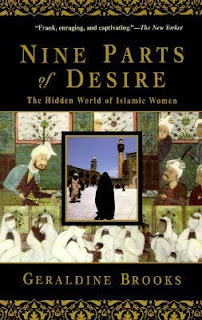 Nine Parts of Desire: The Hidden World of Islamic Women opens as Geraldine Brooks, foreign correspondent for The Wall Street Journal, attempts to check into a hotel in Saudi Arabia in the early 1990's:

The hotel receptionist held my reservation card in his hand. "Mr. Geraldine Brooks," he read. "But you are a woman."

The receptionist goes on to explain to Brooks that a lady does not travel alone in Saudi Arabia. "There is no reason for it. Unless she is a prostitute."

Brooks winds up in a police station where her travel documents and press credentials are verified. The officer says, " I think the lady hasn't been in Saudi Arabia very long. She doesn't know our customs." He eventually issues a permit that allows her to spend the next few hours in the hotel.

In Nine Parts of Desire, Brooks offers a look at the lives of Muslim women through a series of vignettes gathered while on assignment in the Middle East. She is clear, insightful, and very careful to avoid "the sensational and the stereotypical." Enough historical perspective is included to help the Western reader understand culture and tradition. The book is divided into twelve chapters with each focusing on a specific aspect of life - from veiling, marriage, and education, to business, politics, and even athletic competition. An entire post could easily be written on each chapter.

The book's title comes from the quote:

"Almighty God created sexual desire in ten parts; then he gave nine parts to women and one to men," said Ali, the husband of Muhammad's beloved daughter Fatima and the founder of Shiite Islam. (page 39)

Brooks reflects on how this is the polar opposite of her Catholic school teaching.

A chapter titled "The Holy Veil" ends with this summation:

"Getting to the truth about hijab was a bit like wearing it: a matter of layers to be stripped away, a piece at a time. In the end, under all the concealing devices - the chador, jalabiya or abaya, the magneh, roosarie or shayla - was the body. And under all this talk about hijab freeing women from commercial or sexual exploitation, all the discussion of hijab's potency as a political and revolutionary symbol of selfhood, was the body: the dangerous female body that somehow, in Muslim society, has been made to carry the heavy burden of male honor." (page 32)

One chapter is devoted solely to Mohammad - his wives, children, revelations, etc. A detailed account of the Shiite-Sunni schism is included here. Brooks' meetings with King Hussein and Queen Noor are the subject of still another chapter, and make for very interesting reading.

It's important to keep in mind that the treatment of and restrictions placed upon women vary widely among countries in the Middle East. Also very important is the fact that this book was published in 1995. The world has changed a lot in the last fifteen years and, after turning the last page, I was left wishing for an "afterwards". Where are these women now? How have their lives changed?

My book club had, as you might expect, a very lively discussion of this book. I highly recommend Nine Parts of Desire.

Update: Booksnyc of Books in the City sent me this link to a new afterword found on Geraldine Brook's website. Thank you!!