The Hours by Michael Cunningham - revisited 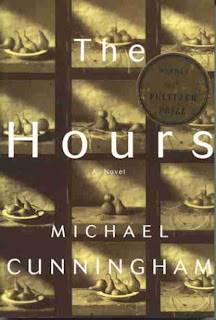 Before I read The Hours by Michael Cunningham in 2003, I was well-aware of the connection to Mrs. Dalloway. Although I'd never read Virgina Woolf, it still seemed like an interesting premise for a novel. Plus, as a Pulitzer Prize winner, it fit in with the award-themed reading I was doing. As it turned out, The Hours was one of my favorite books that year. Cunningham's writing impressed me so much, I immediately read A Home at the End of the World and loved that, too! The Hours earned a spot in my 'permanent collection', and I knew I would revisit it one day.

That day came last month. Thanks to a gentle nudge from Woolf in Winter, I finally managed to read Mrs. Dalloway. As I turned the final pages, The Hours was already calling out, so I started it immediately. What was a good story with excellent writing in 2003 became sheer brilliance with Mrs. Dalloway fresh in my mind!

The prologue is an imagined account Virginia Woolf's suicide in 1941. The novel goes on to alternate, in relatively short chapters, between the lives of three women: Virginia Woolf, Laura Brown, and Clarissa Vaughan... all connected, in some way, to Mrs. Dalloway.

It opens with Clarissa Vaughan leaving her flat in New York City at the end of the twentieth century.

"There are still flowers to buy. Clarissa feigns exasperation (though she loves doing errands like this), leaves Sally cleaning the bathroom, and runs out, promising to be back in half an hour." (page 9)

Clarissa, 52, is giving a party for her friend Richard (who nicknamed her Mrs. Dalloway many years ago). He is a poet suffering from AIDS and is to be awarded a major literary prize later that evening.

The chapters about Virginia Woolf show her in the process of writing Mrs. Dalloway.

"Not eating is a vice, a drug of sorts - with her stomach empty she feels quick and clean, clearheaded, ready for a fight. She sips her coffee, sets it down, stretches her arms. This is one of the most singular experiences, waking on what feels like a good day, preparing to work, but not yet actually embarked. At this moment, there are infinite possibilities, whole hours ahead." (page 34)

Laura Brown is a suburban California housewife in 1949 who has difficulty coping with life's demands and is longing to retreat into the world of her current novel (Mrs. Dalloway).

"She brushes her teeth, brushes her hair , and starts downstairs. She pauses several treads from the bottom, listening, waiting; she is again possessed (it seems to be getting worse) by a dreamlike feeling, as if she is standing in the wings, about to go onstage and perform in a play for which she is not appropriately dressed, and for which she is not adequately rehearsed. What, she wonders is wrong with her. This is her husband in the kitchen; this is her little boy." (page 43)

Other thoughts on The Hours:
another cookie crumbles
A Guy's Moleskin Notebook
Deucekindred's Blog