The Quiche of Death by M.C. Beaton 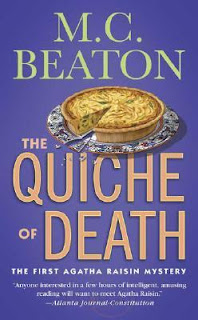 The Quiche of Death

'Tis the season... for a cozy mystery and, thanks to Book Psmith, I have discovered Agatha Raisin. Have you met her? At 53, Agatha has retired early from her public relations firm in London to move to the small village of Carsely.

"She had come a long way from her working-class background in Birmingham. She had survived an unfortunate marriage and had come out of it, divorced and battered in spirit, but determined to succeed in life. All her business efforts were to one end, the realization of a dream - a cottage in the Cotswolds." (page 1)

To Agatha, the Cotswolds "represented everything she wanted in life: beauty, tranquility and security... Even as a child, she had become determined that one day she would live in one of those pretty cottages in a quiet peaceful village, far from the noise and smells of the city."

By the end of the first page, I already like Agatha, I love the setting and, although cozy mysteries are a departure from my usual reading fare, I'm ready to settle in for some fun.

Agatha finds herself slightly bored and lonely despite the idyllic setting. In an effort to meet people and make friends, she enters a local baking contest. The small problem of not being a baker is solved by purchasing a quiche from a London bakery. The quiche doesn't win, and things begin to get complicated when the judge dies after eating a second slice. Of course, Agatha lends the local police agency an unsolicited hand in solving the mystery - risking her own life along the way.

The Quiche of Death has me thinking of adding the occasional cozy mystery to my literary diet . The village characters are delightful and, with twenty titles in the series, there will be plenty of further escapades for this "lovelorn middle-aged detective".
Posted by JoAnn at 6:10 AM