"The Villa Lucienne" by Ella D'Arcy

It's back to The Virago Book of Ghost Stories for this week's short story post. The clock has been turned ahead almost fifty years from Mrs. Gaskell's suspenseful tale, "The Old Nurse's Story". This week's story is "The Villa Lucienne" by Ella D'Arcy. Here are the opening two sentences:
"Madame Koelegon told the story, and told it so well that her audience seemed to know the sombre alley, the neglected garden, the shuttered house, as intimately as though they had visited it themselves, seemed to feel a faint reverberation of the incommunicable thrill which she had felt - which the surly guardian, the torn rag of lace, the closed pavilion had made her feel. And yet, as you will see, there is in reality no story at all; it is merely an account of how, when in the Riviera two winters ago, she met with some friends to look over a furnished villa, which one of them though of taking."
Upon finishing the story and rereading the first paragraph, it's apparent this opening is also the perfect review. I wondered how it had come to be included in a collection of ghost stories, when there is only a passing mention of a woman (or ghost) seen by a child, that remains unseen by the adults. What the story does, however, is paint a series of very vivid images which rapidly shift between great beauty and eerie, cool darkness and unease. 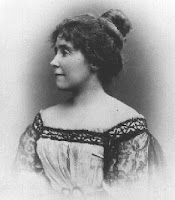 Ella D'Arcy (1856? - 1939) was a regular contributor to The Yellow Book Quarterly, where "The Villa Lucienne" appeared in 1896. Her writing was said to be influence by the "New Realism" of naturalistic French fiction. Her stories often show a psychological realism and an unsentimental treatment of character and situation that critics have compared to Balzac and Zola.
D'Arcy's descriptions were, for me, clearly reminiscent of Zola. Although this story is representative of this "naturalistic fiction", I am surprised at it's inclusion in a collection of ghost stories. It can be read in its entirety here.
Posted by JoAnn at 8:33 AM