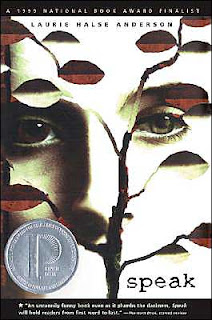 At our September meeting, my book club discussed Speak by Laurie Halse Anderson. Since I haven't written about the book, I'll direct you to Molly's review for some background. Many bloggers have read and reviewed Speak, but it was Molly's review that prompted me to finally read the book.
Nine of us met for coffee at a member's home on a gray, rainy morning. She surprised us with muffins and fruit salad. After some catch-up conversation, mostly centered around our high school and college aged children, we quickly moved on to the book discussion.
First, we noted what a departure this was from our usual reading fare. In ten years, we have never chosen a YA title. Speak made the cut, in part, because it appeared on the 11th grade summer reading list (a few of us have 11th graders) and because I picked up a copy for a dollar at last summer's book sale and brought it to a meeting (a book physically present always seems to have a better chance of "winning").
Our next discovery was that everyone had read the book! This may not be remarkable for most groups, but it is worth noting when it happens to us. Several members tend to abandon books that are too long, too hard, or too depressing. Perhaps we should periodically include YA selections!
From there, it was on to the book itself. We were all impressed that Anderson really seemed to get it right. How could someone over 30 capture the high school voice and concerns so perfectly? We saw flashes of our children's experiences, and had many of our own brought back as well. The unanimous consensus was that none of us wants to go back!
Not only did Anderson get the voice, she hit nailed the location. Anderson graduated from the high school in a neighboring town, and we couldn't help but laugh at lines like "The sun doesn't shine much in Syracuse, so the art room is designed to get every bit of light it can." Her description of the cold and winter weather rang true, too. I'm not sure if the mascot controversy she wrote of actually occurred, but her old high school's teams are still known as the Hornets. However, I, thankfully, have not heard the chant "We are the Hornets.... the horny, horny hornets!"
For a little in the way of plot background, the main character, Melinda, was raped at a summer drinking party. She called the police, who descended upon the party, but never reported the rape. Melinda became an outcast at school the following year, and eventually stopped speaking.
The majority of our discussion focused on the self-esteem of teenage girls and the intense peer pressure present in the high school. A couple members had an edition with extra material, including an author interview in the back (I did not). In it, Anderson noted that in talking with readers about the book, she was shocked to discover that most teen-age boys have little understanding of rape or it's consequences. She said several boys raised the point that it wasn't actually rape because Melissa didn't object (not seeing the problem in her being too drunk to protest). We also spent quite a bit of discussion time on this issue, as well.
Overall, we loved the book and had a very stimulating discussion. In the end, we realize that, as parents, the most important thing we can do is strive to maintain the same level of involvement and communication with our own teens as we had when they were younger. We all need to keep speaking!
Posted by JoAnn at 9:53 AM

Email ThisBlogThis!Share to TwitterShare to FacebookShare to Pinterest
Labels: book club, YA fiction