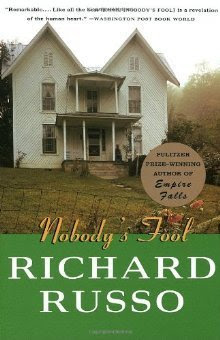 Upper Main Street in the village of North Bath, just above the town's two-block-long business district, was quietly residential for three more blocks, then became even more quietly rural along old Route 27A, a serpentine two-lane blacktop that snaked its way through the Adirondacks of northern New York, with their tiny down-at-the-heels resort towns, all the way to Montreal and prosperity. The houses that bordered Upper Main Street, as the locals referred to it - although Main, from its "lower" end by the IGA and Tastee Freeze through its upper end at the Sans Souci, was less than a quarter mile - were mostly dinosaurs, big, aging, clapboard Victorians and sprawling Greek Revivals that would have been worth some money if they were across the border in Vermont and if they had not been built as, or converted into two- and occasional three-family dwellings and rented out, over several decades, as slowly deteriorating flats.

It's not the entire first paragraph, but those two sentences are enough to show Richard Russo hard at work setting a scene... and I already recognize the tiny upstate New York village. My book club will discuss Nobody's Fool  a week from Friday and, even though I'm still reading both Sweetbitter and Cranford, it's time to get started.

Empire Falls (a favorite in 2001) was my introduction to Russo and I've been reading him ever since. Somehow I never got around to this 1993 novel, but can't imagine not loving it. If time becomes an issue, there's always the movie. You can't go wrong with Paul Newman, right?


Richard Russo's slyly funny and moving novel follows the unexpected operation of grace in a deadbeat town in upstate New York—and in the life of one of its unluckiest citizens, Sully, who has been doing the wrong thing triumphantly for fifty years.

Divorced from his own wife and carrying on halfheartedly with another man's, saddled with a bum knee and friends who make enemies redundant, Sully now has one new problem to cope with: a long-estranged son who is in imminent danger of following in his father's footsteps. With its sly and uproarious humor and a heart that embraces humanity's follies as well as its triumphs, Nobody's Fool is storytelling at its most generous.

Would you keep reading?