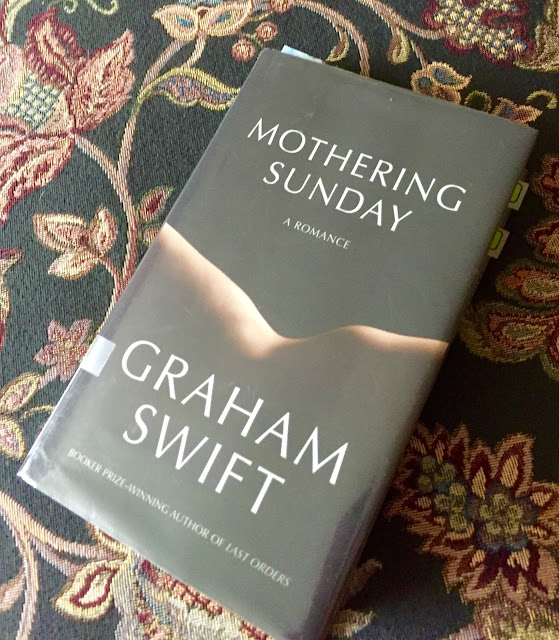 Summary (from Goodreads):
Twenty-two year old Jane Fairchild, orphaned at birth, has worked as a maid at one English country estate since she was sixteen. And for almost all of those years she has been the secret lover to Paul Sheringham, the scion of the estate next door. On an unseasonably warm March afternoon, Jane and Paul will make love for the last time--though not, as Jane believes, because Paul is about to be married--and the events of the day will alter Jane's life forever. As the narrative moves back and forth from 1924 to the end of the century, what we know and understand about Jane--about the way she loves, thinks, feels, sees, remembers--deepens with every beautifully wrought moment. Her story is one of profound self-discovery and through her, Graham Swift has created an emotionally soaring and deeply affecting work of fiction.

Mothering Sunday  was a near perfect reading experience. I started it on a Friday evening while sipping a glass of wine by the lake. Within a few pages, the narrative cast a spell and it held me captive until I turned the final page Saturday morning.

Swift's writing is simply beautiful - every word carefully chosen, every sentence perfectly crafted - and it left me in awe of his talent.

The novel's action takes place on a single day (Mothering Sunday, May 1924), though the story actually weaves in and out of time over the course of Jane Fairchild's life... in a manner reminiscent of Mrs. Dalloway. I was also reminded of Ian McEwan's On Chesil Beach and, though I can't explain precisely why, Julian Barne's The Sense of An Ending. Both of those were favorites the year I read them. The setting, time period, and upstairs/downstairs interactions were an added bonus for this Downton Abbey fan.

My one complaint about Mothering Sunday? It was too short. I would have relished another hundred pages of Jane.

It's always a thrill to discover a new author, but why did it take me so long to get around to Graham Swift? I plan to read his entire backlist now. Hopefully those previous novels are as good as Mothering Sunday.

Jane thrills to words of all kinds, calling herself a gatherer... They’re never enough, as the book makes clear, but they’re the only tools we’ve got. Life is “about finding a language,” however ineffectual it may be...

...and the point of libraries, she sometimes though, was not the books themselves but that they preserved this hallowed atmosphere of not-to-be-disturbed male sanctuary.

The gathering evening, the apricot light, the gauzy green-gold world, was impossibly beautiful.

She was... put into service.... it made you an occupational observer of life, it put you on the outside looking in. Since those who served served, and those who were being served - lived. Though sometimes, to be honest, it felt at the time entirely the other way round. It was the servants who lived, and a hard life they had of it, and the ones who were served who seemed not to know exactly what to do with their lives. Proper lost souls, in fact...