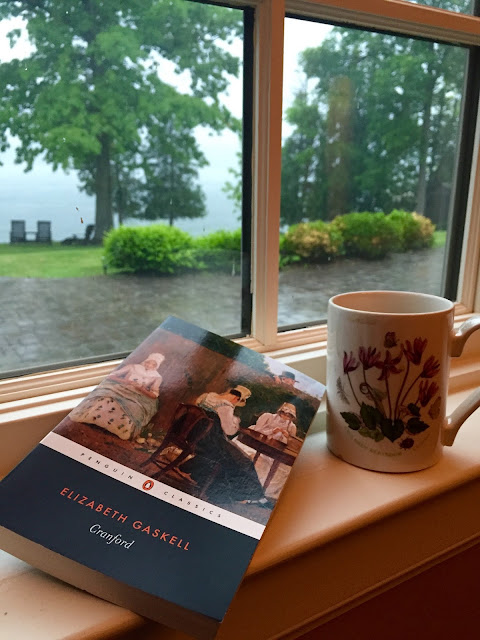 Goodreads summary:
A portrait of the residents of an English country town in the mid nineteenth century, Cranford relates the adventures of Miss Matty and Miss Deborah, two middle-aged spinster sisters striving to live with dignity in reduced circumstances. Through a series of vignettes, Elizabeth Gaskell portrays a community governed by old-fashioned habits and dominated by friendships between women. Her wry account of rural life is undercut, however, by tragedy in its depiction of such troubling events as Matty's bankruptcy, the violent death of Captain Brown or the unwitting cruelty of Peter Jenkyns. Written with acute observation, Cranford is by turns affectionate, moving and darkly satirical.

My Three Sentence Review:
Gentle, genteel, and oh so charming! I enjoyed my time in this small English village. Reading Mrs. Gaskell is always a pleasure.

A note on the audio production:
I chose a read/listen combination after my twitter conversation with Thomas. He praised Prunella Scales narration, but I wasn't familiar with her work. I now agree she is wonderful, but Juliet Stevenson remains my favorite female voice for British classics.

Now I must watch BBC series!