Circling the Sun, West With the Night, and my book club 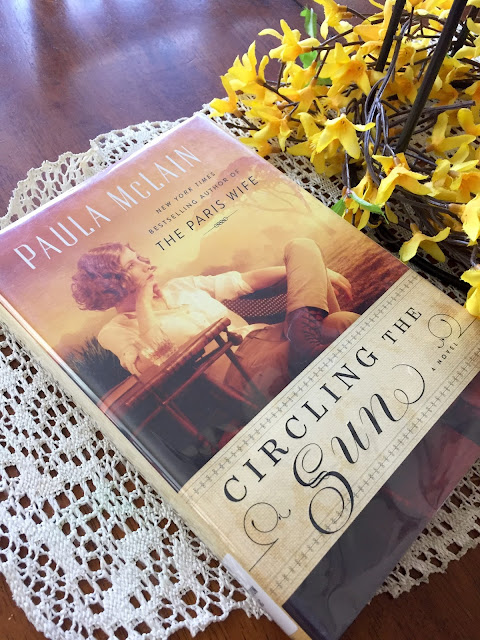 I was disappointed when my book club selected Circling the Sun by Paula McLain for our May discussion. I listened to McLain's earlier novel, The Paris Wife, in 2011 and thought it was a good book, but not a great one. Still, I resolved to give her latest a try. After a winter in Florida, I missed my book club and wasn't about to go to the meeting without having read the book.

Basically, the novel is a fictionalized biography of Beryl Markham, who is perhaps best known as the first woman to fly solo across the Atlantic from east to west. She was also an accomplished horse trainer and lived in Africa for most of her life.

I opted for a read/listen combination, borrowing the book from the library and using an audible credit to download the audiobook narrated by Katharine McEwan. McEwan's narration is excellent and easily pulled me into the story. I thoroughly enjoyed reading about Markham's childhood in Africa, career as a horse trainer, friendship with Karen Blixen (Out of Africa author), and her many affairs.

Yet there was a good deal of frustration, too. Beryl Markham was a real person, so which parts were fact and which were products of the author's imagination? This is a problem I have with all fictionalized biographies... and why they usually end up sending me in search of the real thing. 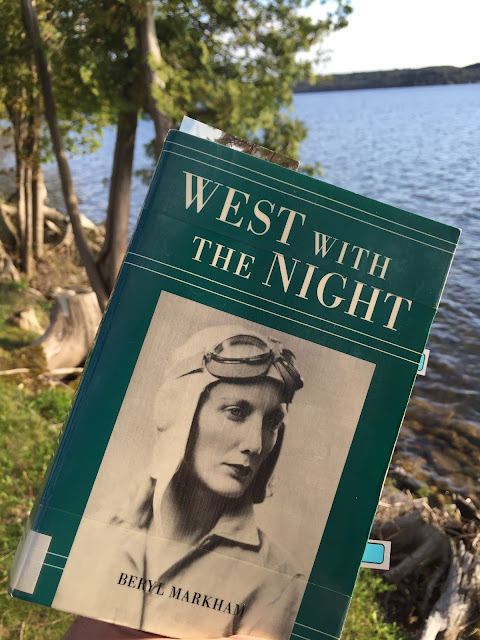 In this case, the real thing is West With the Night by Beryl Markham. Again, I borrowed the book from the library and downloaded the audio version narrated by the late Anna Fields. It was a pleasure to hear Field's voice again, but I had a much harder time getting into this one.

Markham doesn't let the reader get as close as the fictional Beryl in Circling the Sun does. Her feelings seem to be wholly absent from the book. She obviously loves Africa and her work (horses and flying), but there is very little here about relationships. Her emotional self and personal life remain an enigma. When Denys Hatton-Finch dies in a plane crash, there is no hint of anything more than a working relationship between the two them. (Perhaps that was a fictional aspect of Circling the Sun?) Markham's mother and Karen Blixen are not even mentioned.

West With the Night does provide wonderful descriptions of Africa, as well as stories of Markham's work as a horse trainer and her experiences as a pilot. That is more than enough to make this an interesting memoir.


"Africa is mystic; it is wild; it is a sweltering inferno; it is a photographer's paradise, a hunter's Valhalla, an escapist's Utopia. It is what you will, and it withstands all interpretations."

"You can live a lifetime and, at the end of it, know more about other people than you know about yourself. You learn to watch other people, but you never watch yourself because you strive against loneliness. If you read a book, or shuffle a deck of cards, or care for a dog, you are avoiding yourself. The abhorrence of loneliness is as natural as wanting to live at all. If it were otherwise, men would never have bothered to make an alphabet, nor to have fashioned words out of what were only animal sounds, nor to have crossed continents -- each man to see what the other looked like."

I enjoyed the Circling the Sun and rated it 4 stars. West With the Night  was a very good memoir, but not what I was expecting. For that reason, I ended up giving it 3 stars.

I'm certain I would have liked West With the Night  more if I'd read it before the novel. That way, the novel could have filled in the blanks left by the memoir. Instead, the memoir failed to provide the answers I sought. However, since Markham's personal account is so vague, I now understand the motivation for writing a novel.

Six of us met for coffee on a Friday morning, and five had read the entire book. I thought this would have been a very popular selection but, surprisingly, I enjoyed it more than most of the others. I was also the only one compelled to seek out the memoir.

We spent some time bemoaning the current popularity of fictionalized biographies, discussing our frustrations with that type of novel, and wondering how much longer the trend will continue. We also shared our experiences with the author's previous book (not a book club selection, but one most of us had read) and compared it to Circling the Sun.

We spent a great deal of time talking about Markham herself and how she was a woman ahead of her time. Her life was certainly remarkable, but not especially shocking by today's standards. We also discussed life in Africa, both during Markham's time and today, and even took a little detour into the world of "Glamping" and safaris.

Next month we will discuss Nobody's Fool  by Richard Russo.
Posted by JoAnn at 9:59 AM